How a slow, simple airplane became an icon. 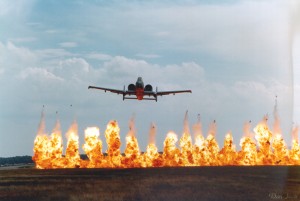 “General Herbert “Hawk” Carlisle, chief of the Air Force’s Air Combat Command, said earlier this week that he would deploy A-10s to Incirlik Air Base in Turkey, where these bruisers would join the fight against Islamic State. Able to fly for long periods and pick out small ground targets with precision, the A-10s are simply too effective and too tough to leave out of the battle against ISIS.

“I have A-10s and I will use them, because they’re fantastic airplanes,” he said. “Their guys are incredibly well-trained and they do fantastic work in support of the joint warfight…..”