By Fred Manzo Hi, all. Last Saturday we ran the “It Will Cost What It Will” teaching scenario of our upcoming game “At Any Cost” through its final paces. Hermann Luttmann played the Prussians

Hello to both the Revolution Games and Legion Wargames customers. We have partnered together to send you out these new releases from our companies. TARGET FOR TODAY by Steve Dixon TARGET FOR TODAY is a solitaire

“Thunder in the Ozarks: The Battle of Pea Ridge” now on Pre-Order from Revolution Games

From Revolution Games:  “The Battle of Pea Ridge was a critical engagement fought on March 8th and 9th 1862 between the Confederate Army of the West under Major General Earl Van Dorn and the 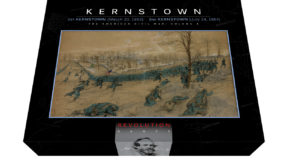 By Claude Whalen: [Editor’s Note: Claude Whalen is the designer of the upcoming Revolution Games “First and Second Kernstown” in their “Blind Swords” series. He was also one of the main playtesters for Revolution’s