The National Interest: Hitler’s Last Stand – Why the Battle of the Bulge Still Matters 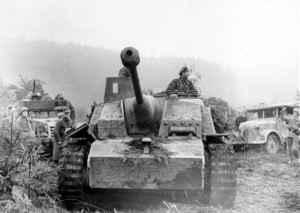 As the Bulge proved, brave soldiers can make up for failed strategy. But only at immense cost. – National Interest

The attack began with a barrage from 1,600 guns and rocket launchers that pounded trenches and command posts. Then came waves of tanks and infantry that surged out of the winter mist and slammed into the stunned and bewildered defenders.

It was a perfect example of shock and awe. Except that in December 1944, it was Americans who were on the receiving end.

This month marks the 70th anniversary of the Battle of the Bulge, perhaps the greatest battle ever fought by the U.S. Army. A few tired or inexperienced U.S. divisions, assigned to what was supposed to be a quiet sector in the Ardennes region of Belgium, were assaulted by thirty German panzer and infantry divisions and 600 tanks in a massive surprise offensive….