Vietnam Solitaire Special Edition – A Preview on The Boardgaming Way 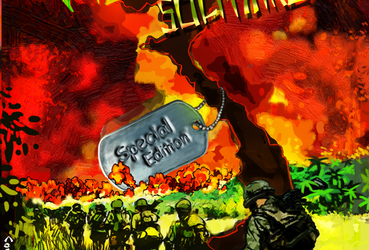 By The White Dog Games Staff

According to designer David Kershaw, “The first version of the map was drawn on the back of a travel book, The Rough Guide to Thailand, at the poolside of a hotel in Krabi, Thailand. I had just returned from a week long foodie holiday in Vietnam. This was a guided tour, but it covered the whole country, North and South, and as there were only 4 of us in the tour group, we were left free to explore. As well as food-related stops, the tour included the Cu-Chi tunnels and the war museum in Hanoi. I was already a wargamer and had dabbled a bit with creating standard hex-based wargames. I still remember in those half-awake moments thinking about how to do a Vietnam wargame with only a few counters in order to show the grand strategy of the war, rather than on a tactical level.”

“The insurgency nature of the war and the high mobility of US forces led to the concept of Regions, and then Areas within regions to regulate movement. It could have been 6 Areas in each Region (to fit with a D6) but 4 was visually more appealing and also meant that 2 Areas were more likely to be selected than others (1 – 2 or 3 – 4 or 5 or 6). The Ho Chi Minh trail was essentially a way to get random reinforcements in, but with the addition of B-52s and Special Forces, it became a mini-game in itself.” After additional research David also concluded there was a general belief the Viet Cong (VC) guerrillas were experts at jungle warfare who ambushed unwilling US conscripts, forcing America out of the war and over running South Vietnam. This is far from what really happened. In the historical Vietnam War, the VC was largely ineffective and the NVA was many times out-gunned. The Army of the Republic of South Vietnam (ARVN) had limited capability and resources and mixed fortitude, but US forces were rarely defeated. The answer as to why the war was lost is, therefore, basically a political one and is represented by a Political Point system in the game.

All this resulted in David designing a solitaire game on the war, as exhibited in the original edition was released a few years ago. In Dave’s original design the player commanded the US/ARVN forces against a simulated NVA/VC foe controlled by the rules. In that edition, the US/ARVN player was challenged to keep the NVA/VC at bay long enough to break their will. A diminishing number of Political Points were available to the US/ARVN each turn to conduct combat, raise new units, launch air strikes and conduct strategic warfare with B-52s and Green Berets. As one would expect, this put the US/ARVN player under severe time pressure. Fortunately, the White Dog Games version will include both rules sets plus upgraded artwork for the map and counters. It will have a total of 87 counters and a 11″ x 17″ map. Both games use the same sequence of play, area movement system and political point chart, but the mechanics are a bit different in each.

In these games the Ho Chi Minh Trail is represented by 6 Trail Areas that govern NVA (but not VC) entry into Regions and Areas. The Trail Areas include Hanoi, Haiphong and 2 each in Laos and Cambodia. These Trail Areas may sometimes be bombed by B-52s in the case on Hanoi and Haiphong and the others can be attacked by Green Berets and B-52s, but a player has only so many Political Points each turn that have to be allocated among several differing demands of the game. In the Special Edition rules, the Trail Areas of Hanoi and Haiphong have SAM and MIG units to protect them and abort some B-52 attacks. The decision of how hard to attack these Trail Areas has to be balanced against other decisions using a player’s limited resources and political events.

Ground combat will occur when forces of both sides occupy the same Area. There are 3 types of Areas in the game – jungle, rice paddy and urban. Counters in Vietnam Solitaire will have 3 numbers on the bottom indicating their combat strength in each type of Area. Units could cause a casualty for the other side on a die roll of the applicable unit strength or less. Only the US/ARVN player in the solitaire version may retreat at the end of each round of combat (in the two player version, the NVA/VC player will have some options to retreat to a jungle Area). The US/ARVN player also has Napalm that can be used during ground combat. In addition, there is an “Attack Trail Areas” phase where the US/ARVN player can attack one or more of the 6 Trail Areas with B-52s or Green Berets to prevent NVA forces from entering South Vietnam.

However, Napalm, B-52s, Green Berets, the raising of new units and the moving of units from one Region to another all cost Political Points. And as there are only a limited number, players will have to plan their strategy accordingly. Plus, it’s important to realize that Political Event rolls may temporarily take away some of these abilities.

We’ve therefore found that combat in Vietnam Solitaire tends to be fairly bloody as the US/ARVN player has to keep the NVA/VC from controlling Regions if he is to win.

As White Dog Games likes to have all the charts and as much other information on the maps as possible in order to ease game play, the turn sequence will also be there. In addition, we’ve listed it here:

Using the Original Rules, the game should take anywhere from 30 to 45 minutes, while the Special Edition Rules should take from 45 minutes to an hour. But if the two player option is used a typical game might last as long as 90 minutes. Obviously, during a player’s first try it might take somewhat longer but the game is intended to be quick playing.

Vietnam Solitaire aims to be a strategic level, fast game of low to moderate complexity (say 2 out of 5 on a difficulty scale or a game with just enough complexity to insure re-playability). It is now scheduled to be released in the last quarter of this year, possible as early as November.