Games Imagine Scenarios From 1948 War to Strike on Iran 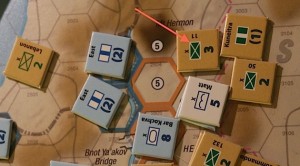 It is October 1973, and the state of Israel is in mortal danger. To the north, Syrian tank columns have overwhelmed the handful of Israeli defenders on the Golan Heights. To the south, Egyptian troops have crossed the Suez Canal and are advancing through Sinai. You command the Israeli forces desperately mobilizing to meet the Arab onslaught. Will you concentrate your troops against the Syrians or the Egyptians? Will you order them to counterattack aggressively, or time your counterstroke until after the Arabs have battered themselves against your defenses? What are you going to do?………