Weapons and Warfare: FOUNDATION OF THE PRAETORIAN GUARD 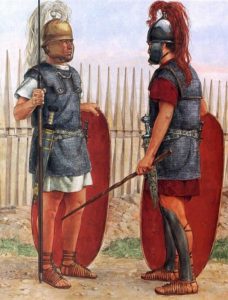 “Octavian turned the praetorians into a regularized, privileged and organized part of his power base as Augustus, Rome’s first emperor. The Praetorian Guard enjoyed advantageous pay and conditions, but by dispersing them around Rome and Italy Augustus avoided creating the impression that he ruled at the head of a military dictatorship. Augustus focused far more publicly on his constitutional position and playing down the fact that he had come to power, and remained in power, as the result of naked force. He needed the army and the Guard, and they needed him….”