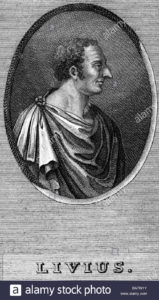 “The Second Samnite War was the background which Livy, our only major literary source for this period, used to describe the changes in Rome’s army during the fourth century BC and the advent of the so-called ‘manipular legion’. In the following passage, which is arguably one of the most famous and important relating to Rome’s early military development during the Republic, Livy offers a general description of Rome’s military development to that time along with one of the most detailed descriptions of Rome’s military tactics:

The Romans had formerly used small round shields; then, after they began to serve for pay, they made oblong shields instead of round ones; and what had before been a phalanx, like the Macedonian phalanxes, came afterwards to be a line of battle formed by maniples, with the rearmost troops drawn up in a number of companies….”