When  we last left our intrepid heroes their front line ran across the VERY badly damaged Vogelsdorf. Against this position, their ancient enemies, the Orc and Goblin hordes, have launched repeated assaults.

Every one of which has failed.

However, all Space Marine and Imperial reinforcements that can reasonably be expected to arrive have already appeared. But, still, the Orc horde advances.

This time Intelligence has determined the Orc commander has 2 more helicopters, at least 2 assault buggies, a captured tank, another Giant Yellow Robot (where DO they get those things?), a platoon of jump troops and twice as many Orc and Goblin fighters as before. Although, only the tank, both choppers, the jump troops and the Giant Yellow Robot are capable of damaging the recovery vehicle transporting the crown jewels. 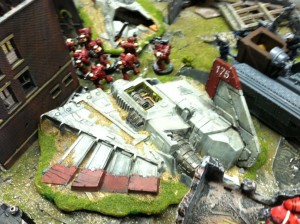 As we join our heroes for today’s episode things are quiet along the entire front. Too quiet. Here we see Space Marine reinforcements examining the wrecked shuttle craft at the heart of this crisis as they move up to the front. 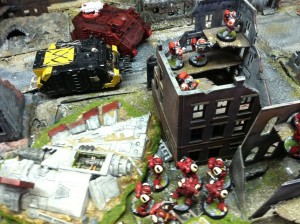 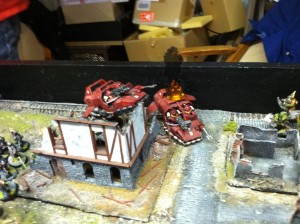 A pair of Earth Skimmers support the Imperial left flank. 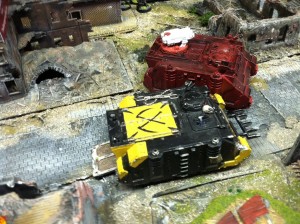 The Engineering/Recovery vehicle is even now transporting the Imperial crown jewels off the battlefield. If it can exit the danger zone the Imperials will have earned themselves a decisive victory. If, however, the Orcs can capture the jewels, the good guys morale will plummet. Both side’s commanders, therefore, know their actual casualties in this battle are irrelevant.

It’s a fight to the death.

Apparently, the Orc strategy will be to attack all long the front until one of their heavy units can, at least, get close enough to the recovery vehicle to damage it. Once it suffers damage the vehicle must stop and attempt to repair itself under battlefield conditions. This process is so time consuming the Orc High Command hopes a tidal wave of Orc fighters will be able to infiltrate through the front line at enough different points to have at least one Orc mob overtake the recovery vehicle.  Once this occurs, the Orcs will close assault it and recover the jewels. This must be prevented At Any Cost ! 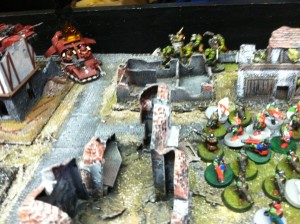 The main Orc assault begins. Goblins and Orcs attack on the Imperial left 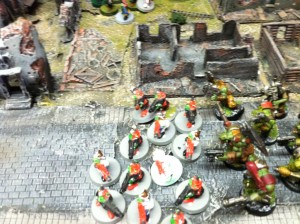 Plus, a swarm of Goblins and Orcs attack the Imperial center. 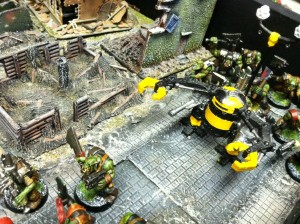 Apparently, they are being supported once again by a Giant Yellow Robot! 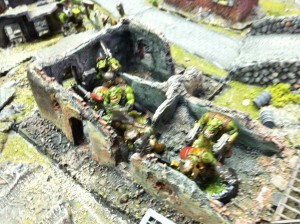 In front of the Imperial right wing a mob of Orc fighters occupy a ruined building and prepares to swarm the Main-Line-of-Resistance. 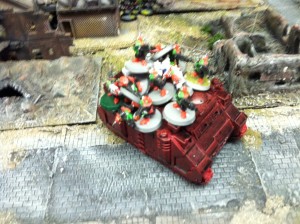 The Goblins reach the APC holding the center of the Space Marine line. At this point, the second APC has fallen back to guard the recovery vehicle and the all-important Imperial crown jewels. 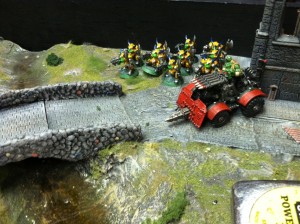 Even more Orcs, this time supported by an assault buggy, advance on the Imperial right. 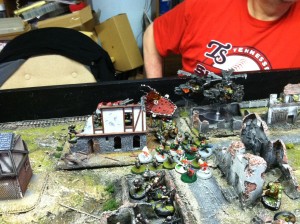 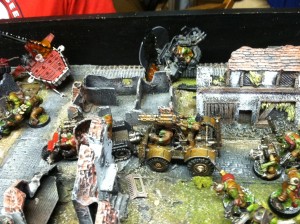 The Orcs bring in yet another assault buggy on the left. 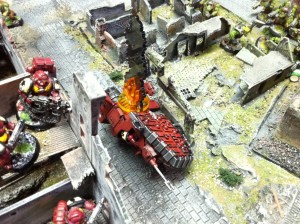 On the right an Earth Skimmer burns fiercely in front of the main line. 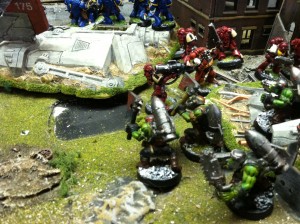 Orc jump troops, the “Storm Boys,” drop behind the Space Marine main-line-of resistance. They are now between the majority of marines and the recovery vehicle!

At this point, the “Storm Boys” are only one jump away from swarming the recovery vehicle itself. Fortunately, the “Storm Boys” landed directly between a full squad of Red Devils on the front line and a squad of Aqua Marines rushing towards the center of their line, which made short work of the “Storm Boys” and their unexpected breakthrough. 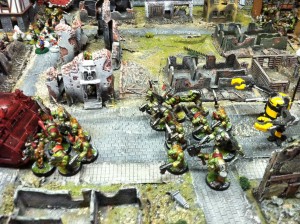 The Space Marine APC driver in the center now goes berserk under the pressure of battle and decides to ram the goblin horde encircling him. Meanwhile, nearby Space Marines hose down his APC in an attempt to clear it of goblins. 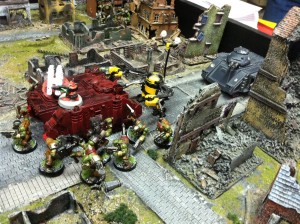 The APC smashes through the Goblin and Orc horde! It even manages to ram the GYR unit (Giant Yellow Robot)! Unfortunately, this only knocked both of them out of the fight.

Things heat up on the right. An Earth Skimmer providing ground support is hit and can be seen burning fiercely in front of a Space Marine strong point.

The Orcs now take this opportunity to reinforce the ruined building directly across from a Space Marine right wing strong point.

Things are now looking even grimmer for the Imperials. Orcs and Goblins are attacking in strength all along the line. At some point they will either break through the front or infiltrate beyond it.  After which there will be little to stop them from catching the slow moving recovery vehicle and either knock it out or, at a minimum slow it down enough to allow follow-on Orc forces to deliver the fatal blow. 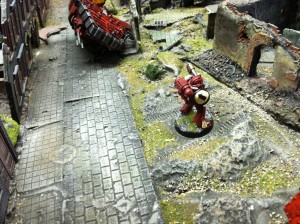 A sole Space Marine Flamer now advances on their right. Once in range he will hose down the entire Orc forward position and eliminate any fighters taking shelter in the ruins. This gutsy move, which may just turn the tide of battle on the right flank, was personally ordered by Major General Benjamin. 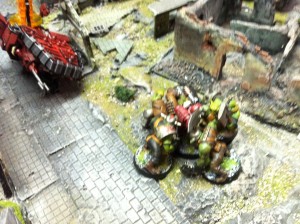 Unfortunately, after disrupting the Orc’s attack plans. the Space Marine flamer is now swarmed by the remaining enemy fighters. It’s now down to hand-to-hand fighting on the right. 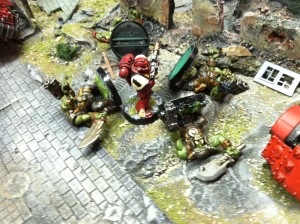 Victory! The Space Marine Flamer knocked out all 4 of his Orc foes mano-a-mano.  (Even though one side consisted of 4 fighters, none of which were human). 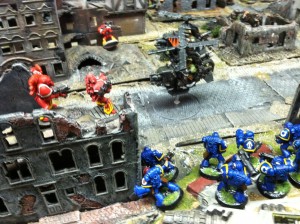 Meantime, in the center the Orcs and Goblins horde has broken through. Apparently, the Orc Commander decided to advance his heavy weapons carriers behind a screen of  Orcs and Goblin cannon fodder! Once the Space Marine strong-points concentrated their fire on the relatively weak infiltrators, the Orc heavy units were free to sprint forward and attempt to knock out the recovery vehicle (or at least slow it down). 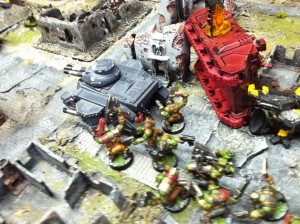 Reinforcing success, the Orc commander rushed new units into the central breach. The above photo shows the sole Orc tank advancing with Orc fighter support. The previously destroyed Space Marine APC may be seen off to the side of the road. 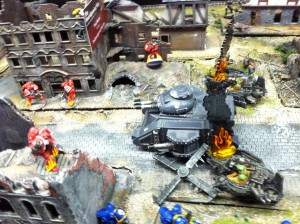 The Orc copters, which instigated the main breakthrough, can be seen here after being knocked out by a platoon of Aqua Marines (below, center). The Orc tank spotted previously may be seen racing passed their wreckage in this action photo.  Things are now beyond grim for the Imperials. The tank even scored 2 direct hits on the recovery vehicle holding the crown jewels. Although this vehicle is heavily armored, two hits should have, at least, damaged it sufficiently for the slow moving Orc hordes to catch up, after which the Orcs would make short work of it, recover the jewels and win a decisive victory for all of Orc-dom! 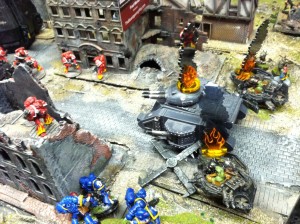 In a dramatic turn of events, the recovery vehicle driver manages, at the last minute, to swerve out of the tank’s line of fire. (He had to roll two saves in order to avoid damage. Due to the slow moving nature of his vehicle, he only had a 1/3 chance of swerving successfully even once. He then managed to swerve successfully twice and insure victory for the Imperials forces!) As each Space Marine squad comes equipped with one TOW-armed trooper, and there were 5 squads in the vicinity of the breakthrough, the lone tank stood little chance of repeating its accomplishment. Once the tank was knocked out the Orcs, while still numerous, lacked any weapons capable of slowing down the armored recovery vehicle sufficiently for their leg infantry to overtake it. This insured a Space Marine victory! In other words, the Orcs had worked their way into a position where they had 8 chances out of 9 of winning, yet they still lost! Snatching defeat from the Jaws of Victory ! 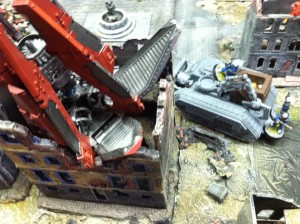 Postscript: The recovery vehicle may be seen in the above photo “racing” off the battlefield, formally insuring an Imperial decisive victory. (A crashed Space Marine drop pod may also be seen to the left in this photo). Though, as that Space Marine commander, Frederick, the Above Average, said after the battle, “It was a near run thing. The nearest run thing you ever saw in your life.”