A Huge World Map on the Edge of a Lake. It Took One Man 25 Years to Build 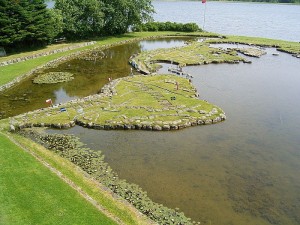 “Mark this down as one of the stranger maps we’ve covered. Along the banks of Denmark’s Lake Klejtrup is a 4,000-square-meter map, built from stones, soil and grass. It’s creator Søren Poulsen spent the last 25 years of his life completing the walkable world.

Poulsen’s inspiration for the map came in 1943 while working on the drainage for meadows surrounding the lake. Finding a stone shaped like Jutland, he decided to complete his own map of the world using more materials from the nearby area. It was a project that would last from 1944 to 1969…..”