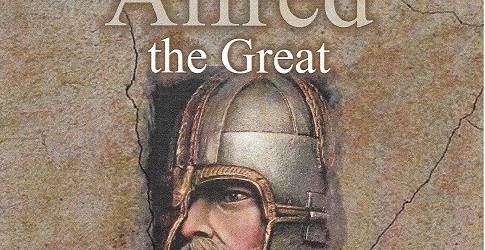 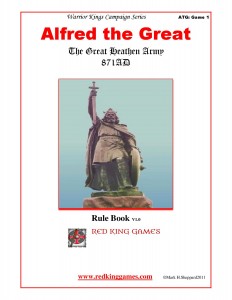 Alfred the Great: The Great Heathen Army 871 AD board game (hereinafter referred to as “ALFRED”) starts in January 871 when King Aethelred (Alfred’s brother) and Prince Alfred face off against the terror and increasing might of the Vikings as led by Kings Halfdan and Bagsecg. Having previously defeated the East Anglicans and reduced Saxon Mercia, the Vikings are resting in winter quarters, girding their strength. They are awaiting further reinforcements from overseas. They may be found at start of the game and our period garrisoning the strategic location of the Royal Estate of Reading and are now poised to attack the Kingdom of Wessex, the last remaining Kingdom of the Saxons not under Viking subjection.

This is the first release of a new publisher, Red King Games. As pointed out in the game’s Introduction, this is meant as the first in a series of games covering the period of Alfred the Great.

ALFRED, being very reasonably priced, is sold as a do it yourself (D-I-Y) PDF (However, see the update below). As such, the counters and map boards should be mounted either on cardboard or posterboard, preferably with a quick drying adhesive glue, such as your favorite glue stick. Notwithstanding an earlier review by a third party, I personally found the counters and map both functional and pleasing to the eye. As a quibble, I personally find some of the fonts for the leader counters to be off-putting. I guess that I am not a Gothic font type of guy, even though they do add a little class and individuality to the player’s army. 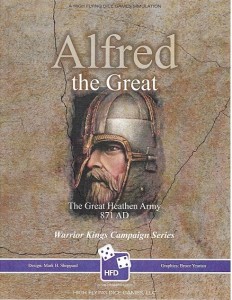 Armies in this time may be likened to two rival rugby scrums trying to push the other side off the field, in the process of attempting to break the other’s line, a shield wall. This is not a game of individual units or a legionary army, a phalanx with joints. The designer cleverly simulates the shieldwall tactics of the period by assigning different values to the militia, warriors/line, jarls/earls, princes and kings. Although perhaps not as exciting as the year’s end of BBC’s Last Kingdom, ALFRED does capture what I like to think is the essence of the tactics of this period, a good shoving match, with all the leaders in the front. A decision is quickly reached, and it is bloody!

Regardless of the strategy selected by the Saxon player, ALFRED often boils down to a climatic showdown. The quick solution, an attempted storming of Readingum during the winter by the Saxons before the arrival of Viking reinforcements in the summer, seems to be a no-brainer, meaning replay value may be limited if they are unable to effect this without incurring minimal losses. This is a shame, since the period and game are interesting.

Perhaps, a more enjoyable, interesting game may be had by amending rule 17 Saxon Loss of Shire Fyrds. The Fyrds if lost other than by combat may return to play following two turns after recapture by the Saxon player. The Viking player cannot simply burn and loot the Shires. He must be able to occupy the Shire for the long run. The question for the Viking player becomes whether to capture the Shire in question and then to dissipate ones strength by garrisoning it. The Saxon player has to decide whether to hang on the flanks of the Viking juggernaut, hoping to recapture any lost territory, or to concentrate and focus solely on having enough strength for the end game.

Although not explicitly covered, it should not be difficult to convert the rules to a miniatures-based game, particularly those rules using elements such as DBA or even Armati, or 1:1 skirmish (person to figures) games such as Duc Bellorum and ShieldWall.  I would personally handle it by treating the King as a General figure and any one prince or jarl/duke as a sub-general. Then form a ratio between the two forces, treating smaller as being equivalent to 12 elements. For every two elements above the smaller sized force, but no more than ten, the larger force gets a re-roll, but no more than five re-rolls.

Regardless, I am looking forward to future games and so should you if you have any interest in the period. 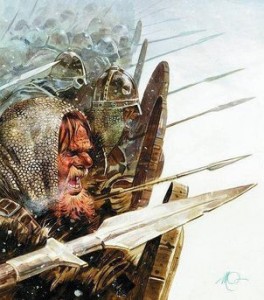 Update 1: Alfred the Great: The Great Heathen Army 871 AD is no longer available as a Print & Play game (both the counters and miniatures version) but is available NOW as a Hard Copy Game.

Update 2: Game 2 in the series is now available as a Print n Play version: Alfred the Great War in the West Country 876 AD’