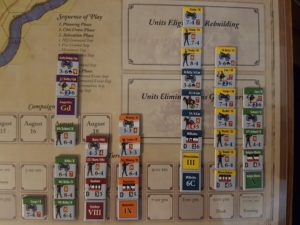 At midday, the first units from Voigts-Rhetz’s X Corps (green) will show up from the south, with one infantry brigade and divisional artillery from Schwartzkoppen’s division plus a cavalry unit.

Later in the afternoon X Corps will also be joined by first its Corps Artillery (3 pm) and then Kraatz-Koaschlau’s division (4 pm, two infantry brigades and divisional artillery) plus Schwartzkoppen’s last brigade, the latter arriving from the west (which may or may not get it OOC next turn depending on where the Corps HQ is).

At 4 pm, a couple of units from the Prussian Guard Corps (purple) also arrive, in the shape of a single small medium cavalry brigade with horse artillery, also arriving from the west. These units do not have any HQ and will thus spend the rest of the session OOC.

At 5 and 6 pm, respectively, two small Prussian corps will arrive from the south. Both formations will arrive by the road leading to Rezonville. The units from Goeben’s VIII Corps (brown) consist of only a single infantry brigade and a reduced artillery unit from Barnekow’s division. Manstein’s IX Corps (orange) contributes a single brigade and reduced divisional artillery from Wrangel’s division as well as a reduced brigade from Prince Louis’ Hessian division.

French forces:
Apart from two divisions from III and IV Corps arriving from Metz to the east, the whole French army begins on-map. 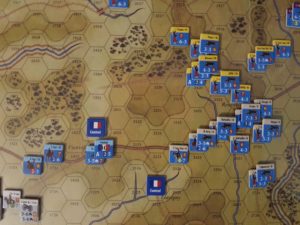 Closest to the Prussians we have Forton’s unfortunate 3rd Reserve Cavalry Division (light blue), with two small brigades of cuirassiers and medium cavalry and some horse artillery, about to get clobbered as they are surprised by Rheinbaben’s 5th Cavalry Division descending upon them.

Behind Forton, just beyond the important town Flavigny (a Minor Victory Control Marker location), we have Frossard’s II Corps (khaki/ivory), deployed in and around Rezonville (an even more important Mandatory Victory hex). It consists of Bataille’s and Verge’s divisions (each with two brigades and divisional artillery including mitrailleuses) plus Lapasset’s small division (a single brigade with weak divisional artillery sans mitrailleuses) and Valabreque’s cavalry (one medíum and one light unit) plus Corps Artillery (one regular and one horse artillery unit). As usual, French brigades tend to be smaller than Prussian ones, with worse Tactical Cohesion Rating (TRC) and Movement Allowance (MA), somewhat made up for by their Chassepot rifles (longer range and bonus when firing) and the potential to combine their fire with the otherwise inferior French artillery’s mitrailleuses (a proto-machine gun) for some truly devastating ranged power.

North of Rezonville we have Canrobert’s VI Corps (yellow). It consists of Tixier’s, d’Villiers’, Levassor-Sorval’s and Bisson’s divisions (the first three with two brigades, the last with only one small brigade, plus divisional artillery although only Tixier’s have mitrailleuses), with no cavalry or Corps Artillery. Canrobert’s corps is usually considered a weak one, but with a total of seven brigades, it still offers plenty of numbers. 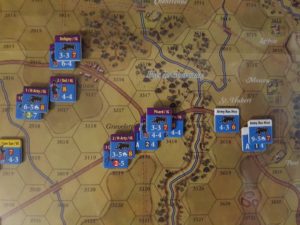 Beyond Rezonville, further to the east, we have the French Imperial Guard (purple) and the Army Reserve Artillery (white) under Bourbaki and Canu, deployed in and around Gravelotte (the town that will win the Prussians an instant Overwhelming Victory if they enter it).

The Imperial Guard Corps is quite small, with only two divisions (Deligny’s Voltigeurs and Picard’s Grenadiers) and rather small brigades. Their advantages are excellent morale (high TCR), good marching discipline (high MA) and unusually strong Corps Horse Artillery. The three cavalry units (one way off to the west with DuBarail, see below) are probably less than useful, only the medium one (Lancers and Dragoons) of helpful strength.

The Army Reserve Artillery consists of two units, one powerful horse artillery, and one field artillery. When stacked and combining fire they offer the only real match to any superior Prussian artillery stacks (although still with lesser range). 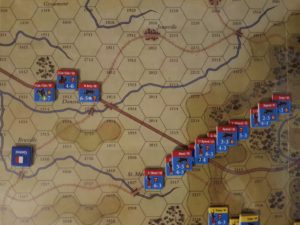 Further north of Rezonville, on one of the Major Roads to Verdun, we have LeBoeuf’s III Corps (red). LeBoeuf has three divisions (Montaudon, Nayral and Aynard, each with two brigades and divisional artillery including mitrailleuses), plus Corps Artillery (two units, one of them a very powerful horse artillery unit) and Clerambault’s cavalry (two units). A fourth division (Metman, with two brigades and divisional artillery) will arrive at 11 am from Metz (east map-edge) but will be OOC and thus unlikely to reach the action barring much luck. 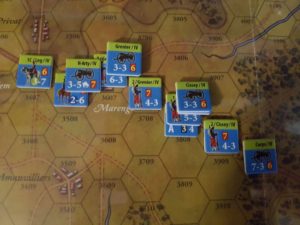 Even further north and east, we have Ladmirault’s IV Corps (green). Ladmirault has two divisions (de Cissey and Grenier, each with two brigades and divisional artillery including mitrailleuses), plus Corps Artillery (two units, one of them horse artillery) and Legrand’s cavalry (two units). A third division (Lorencez, with two brigades and divisional artillery) will arrive at 1 pm from Metz, but like Metman will be OOC. 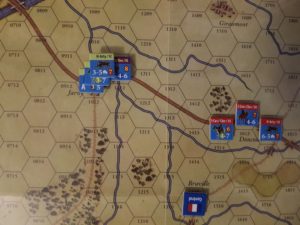 At Jarny (the other Mandatory hex for the French) we finally have DuBarail’s 1st Reserve Cavalry Division (light green), a rather small division (only one cavalry unit plus horse artillery) joined by some OOC Imperial Guard dragoons and lancers.