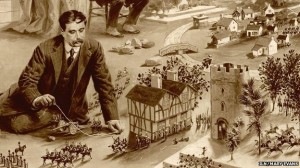 It  is a century since HG Wells published the first proper set of rules for hobby war games. There’s a hardcore of gamers who are still playing in his style.

Pine tips are stuck in the grass to represent trees. Roads are laid out with trails of compost.

This is the Battle of Gettysburg, with Union soldiers on one side and Confederates on the other. But the soldiers of this new Gettysburg are 54mm (2in) tall and mostly made of plastic.

The battle is taking place between a group of enthusiasts in a garden at Sandhurst military academy under rules derived from Little Wars,devised by HG Wells in 1913.

War was then looming in Europe and Little Wars was both an expression of Wells’s passion for toy soldiers and to his fears over the coming slaughter. The science fiction author even believed that war games could change attitudes.

“You only have to play at Little Wars three or four times to realise just what a blundering thing Great War must be,” wrote Wells.

Sandhurst chaplain Paul Wright has updated Wells’s rules – retitled Funny Little Wars – and says about 100 people in the UK still play it. A veteran of Iraq and Afghanistan, Wright has been war gaming since he was a child.

“As an army chaplain, having buried a lot of people and had friends of mine killed, I’d hate to think I was trivialising war but I don’t think I am,” he says……