More than 5,000 people have visited Leicester Cathedral to view Richard III’s coffin before his remains are reintered on Thursday. 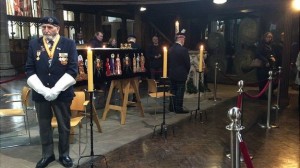 The king’s casket went on display on Monday morning and people waited up to four hours to see it.

Richard III’s skeleton was found under a car park in Leicester in 2012.

A requiem mass was said at Holy Cross Church in Leicester earlier, led by Cardinal Vincent Nichols, leader of the Roman Catholic Church in England.

The reburial ceremony will be held at Leicester Cathedral later this week, led by the Archbishop of Canterbury Justin Welby…..