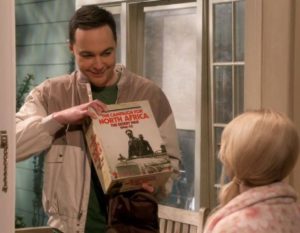 The “Campaign for North Africa,” or CNA, is a legendary game from that legendary company, SPI. When it came out in 1979 it cost an astounding $44 (games always cost less than $10 at that time, if I remember correctly) and for a number of years there wasn’t even an allegation that anyone played it to completion, what with its estimated playing time of 1,000 hours for ten players (though I’ve seen estimates as high as 1,500 hours. But, after all, its never been played to completion enough times by the same group of people to establish a valid estimate). This is the game with the joke rule about Italian troops needing extra water rations for their pasta (they didn’t). It also made players take into account the size of the gas cans each side used (smaller Jerry cans caused less evaporation, you see) and even each pilot’s combat record. It is so complex that when working in an era before computers they lost track of two whole Italian infantry divisions during development and ended up publishing the game without testing. Not even by its designer. (They could not wait the years it would take to complete a single test run). When asked by the publisher what they should tell the first person who claimed it was unbalanced, its designer, Richard H. Berg, was said to have replied: “Just tell them they are playing it all wrong and to start over.” As such, its reputation as the most complex game – by far – ever published was perfect for the Big Bang Theory – Fred.