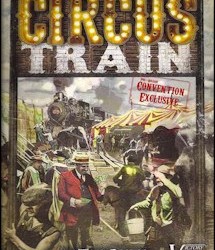 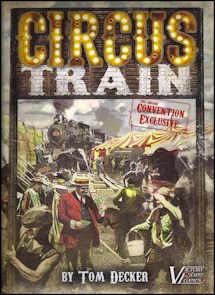 When you slide Circus Train out of its protective sleeve, the first thing to catch your eye is its garish, poster-bright red cardboard case.

Open it, and you are dazzled by a rainbow of laser-cut cardboard markers that must be  snapped apart to play the game…a kaleidoscope of shapes and colors that will become your clowns and elephants, lions and horses, the human cannonball and the sideshow freaks.

The game is remarkably simple. All you have to do is start your Circus Train out in Canada, then go to different cities to put on a show, just making sure you have enough money to pay off your performers and to pay your taxes.

At least, that’s what it looks like in the beginning.

The Circus Train map and playing board – second edition. From Victory Point Games with permission.

Every player gets the same set of action  cards, letting them decide when to perform, how far to move their train and even getting a chance to steal a performer from another player.

But play Circus Train once or twice, and you quickly realize that there is one counter that was never put into the game – an omnipresent magician who is hiding in the rules, who delights in mischief and loves to turn this simple train ride into a roller coaster of dangers and thrills, bringing good fortune and bad, and making it hard for the players to know who will be the winner, even with the help of the victory point counter that runs around the edge of the jigsaw  puzzle game board.

Following these rules to win is a little like asking Loki for help – you can’t quite be sure just what you will be getting.

Welcome to the world of the Circus Train.

The game begins with every player having a cardboard train marker in one of three Canadian cities, each linked by connecting rail lines to other cities across the United States.

Then red and white circus tents – they are called local news counters – are put out in random cities as location cards are pulled. When those tents are flipped over, they show the news – the demand for which different kinds of performers exists in that city. That means a bigger payment for the Circus Train owner who stops in the city and can meet the demand, and  the more clowns or acrobats or elephants you have to meet that demand,  the more you can earn. And, sorry, but the tent is removed from the board after the first player stops there.

And more bad news. Every player has to eventually pay every performer they have on their train. If you can’t pay, they leave and can end up on another train owned by another player.

Bells and Whistles, and Cracking the Whip 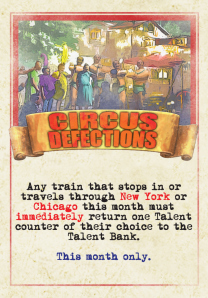 Once a month, a random events card is turned over, and can effect play – for good or ill – for the entire month. There are more than two dozen of those monthly events cards, so its almost impossible to guess what fortune is bringing for every player. The cost of paying talent can go up or down, rail lines can be damaged, taxes can come due. And, the stock market can plummet, costing every player $3 in income for the month. If that card comes up again – and there are two in the pack – then the game ends immediately.

As players go through the circus season – it runs from April to September – new tents keep getting added to the board, although replacements can run out.

When the new tents change color every two  months, they often provide a better pay out for performances, or more points.

As players go from month to month, they gain victory points and their reputation grows with successful performances. But  events can damage a player’s reputation as well, so it pays to have some cash on hand in case you have pay more for your circus performers than you originally planned. Of course, that means you can’t go out and hire all the performers you need for a big pay-off in the city down the line. But, nobody said circus life is easy.

Some optional rules and counters can make life easier. There are characters like BrakemanBill who lets your train go one extra city movement each turn and Trainer Ted, who reduces the pay for elephants to $1 to add to the tent mix. Of course, those wonderful  counters can be stolen by another player who holds the right card in their hand and who stops in your city while your train is still there.

Pay and points go up from April and May to June and July, and again as you get to August and September.

Points are calculated at the end of each month, right after the last player has moved.  There is a special point calculation every two months as well. And, the player who starts first can change from month to month.

Before the points get totaled up, there is one really important thing to remember. The player with the most performers in a single category – clowns or horses or human cannonballs – gets the most points. But, if two players have the same number of performers, neither of them gets anything.

Circus Train game parts. Starting from the center and moving clockwise, there is the first turn marker (the circus tent), each player’s train marker, the Circus Train rulebook, each player’s card deck and the game map (in the lower right hand corner). – Used with permission of Victory Point Games.

The advanced rules allow the game to be customized a bit. If everyone agrees, the players can re-use a discarded card by giving up two levels of reputation. They can add a “rest” card to their hand, and use it to do nothing for one turn, which allows them to do nothing or – if they go back to Canada – they can play the card and get a free clown or acrobat. And, there is a solitaire variant with its own set of victory points based on how much money you earn.

The wonder of Circus Train is that there are so many paths to win, and so many ways to do things – good and bad – that every ride down the tracks is a different adventure, and every game gives a different reason to argue whether luck is a big factor or not.

Its not a typical war game by any means, but its a fine break from the routine, and well worth playing a lot more than once or twice.