This game is the second in a series. I have not played the first, and as I started out on the review process neither had I played the just released expansion to this game known as Dawn’s Early Light Red Hammer. I will use this to my advantage; that of a fresh set of eyes looking at Dawn’s Early Light as a standalone product. 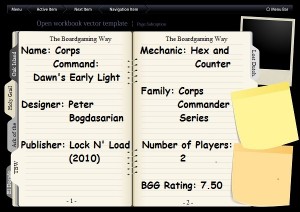 Let’s crack open the box, which by the way is a standard sized bookshelf game box.  My immediate reaction is quite favorable. The map is nicely printed, un-mounted, but printed on heavy stock. It looks to be about 22 x 17 inches, semi-gloss finish, no glare problems from room lighting. Record keeping tracks occupy the map borders.

The game counters are 5/8 inch. Very nice graphics and layout. Not an overabundance of numbers crowded onto the counters. This makes me look forward to reading the rules.

The time track is divided into days, each day has four daylight Impulses, and one night impulse. Hum, no emphasis on the US military’s superiority in night operations, but I might be jumping the gun here.

ALL WAR IS CONFUSION, and to many first time players, myself included, so are these rules. The rules are written to be brief, but therein lies a trap. They are brief, but dense. They must be read carefully and completely; the rule book is shorter than most, but it is no quick study. Dawn’s Early Light does things differently. A nice touch, but be careful with what you assume. Caveat, the rules use a mix of terms generally referring to the same thing. ( e.g. a Couplet is an impulse, but impulses are played by both players, therefore, a couplet. Got that? Overrun attacks are actually more like meeting engagements than actual overruns, and differ from assaults because assaults are launched from a standstill adjacent to the target.) Next, game mechanics, such as hit recovery, are somewhat counter-intuitive, in that you roll to remove each hit, not the more commonplace, just roll once to remove a hit. Combine counter-intuitive and unique rule mechanics, and confusion can abound. But all is not lost.

Several FAQ and player forums exist for this set of rules, and reading them will save the day!

“Dawn’s Early Light” is part of Lock N’ Loads’ Corp Command series of modern combat. The above picture is an example of play.

A central rule to this system is about Activation. Both players roll 1D6 to get their Activation Number (AN). The AN determines which side moves first, with ties going to the West. The AN also determines specifically which units may move. NOTE: only those units with an Initiative Number equal to or greater than the AN may move. This is critical to fair game play, and can become a bit fiddly in “the heat of battle,” so take care when moving. The AN determines how many movement points each activated unit gets. In general, movement points will be equal to the AN +1. There is also an additional +1 for those units conducting 100% road movement.

When a player rolls a 6 for an Activation Number, they must roll 1D6 to determine effect on the Botched/Broken orders table. As you can guess, this isn’t a good thing. (called Botched in the rules, Broken on the map. Beware of little mismatches like this in the rules / map / player aid sheet.)

When a player rolls a 1 on 1D6 for their activation number it only hurts for one impulse because, they get to choose, rather than roll for, their activation number on the following turn. Careful attention must be paid to the sequence of each player revealing choices vs rolling for the next moves AN results when this occurs in the game.

If you are going to purchase this game be prepared to study the rules and the FAQ / forum discussions onlline.

My opponent and I, both rather well seasoned grognards, initially tried to guess our way through questions that arose as we did our first read-through and play attempt, but quickly found that we could not play this game without repeatedly referring to the FAQ and forum discussions found on several wargaming websites; so much so that the FUN was quickly sucked out of playing what was supposed to be a small, operational level game with a short learning curve. With the help of online references we did finally figure out assets, and our other rules questions, we think, and played a game. To be fair we played a second game after we felt we had ironed out the kinks in our understanding of the rules. Our impression was that other than helicopter gunships and air support silhouettes that look like modern aircraft, the game has a distinct WWII feel to it.

So in Dawn’s Early Light we have high quality counters, nice map, interesting game mechanics… BUT. It is my opinion that the rules need a rewrite, including clarifications and examples of play.  The content of the user community FAQ should be evidence enough that the attempt at brevity failed to properly communicate. I would also suggest a table of organization depicting the counters, as they are to be put into play in the scenarios, would be a very useful player aid. Until the rules for this game are clarified, and rewritten, I cannot recommend this game to anyone not willing to invest extra hours online figuring out what the rules failed to make clear enough in the first place.

We wanted to like this game. We are tempted to re-write the rules for our own future use, but as wargamers we so often say such things, and we instantly realize that such a project will be lost to the dustbin of wargamer history, as we discover more enjoyable ways to spend our gaming time.

As I finished the first draft of this review, right on cue, Dawn’s Early Light Red Hammer appeared in the club’s game room.  If you have figured out the original and liked it, you will like Red Hammer; more scenarios, another map, some more counters. For the rest of us, sorry to say, same old confusion, plus a little more confusion.