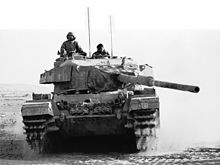 The first time you open Golan Heights and lay out the pieces – the starting position for all the counters is marked on the game board – you might be surprised at how simple it looks. There are just seven Israeli counters on the board – six armor battalions and one infantry brigade – to hold off about 20 attacking units. A separate board to hold reinforcements shows what day they come in, and while there are more Israeli reinforcements than Syrians, it looks like the chance of Israel holding off the attackers fits somewhere between slim and none.

Which is what really happened. Israel stockpiled equipment – not soldiers – near the Syrian Front, but its defensive plans called for a 48 hour warning of any Arab attack, counting on observation and friendly satellite intelligence from allies to know when attacking armies were being put into position to strike. With that warning, the Israeli Air Force could quickly deliver a crushing, pre-emptive attack that would stop the Syrian Army before it could get started. Of course, they didn’t do it. In battle, no plan survives the first contact with the enemy. In this case, the Arab surprise was complete. Israel was caught flat-footed, tricked into thinking all that Syrian troop movement was just an exercise. And since the attack was on Yom Kippur, it meant most of the Israeli army was home on leave, observing the most sacred day of the Jewish year.

Not only are the Israeli troops on the board spread thin, almost all of them are within five hexes of the Jordan River. And, the four Syrian victory hexes needed to win the game are just on the other side of that river. Totally surprised, not enough troops, and the enemy’s victory hexes so close that they are just a walk away – just what you need to spend a challenging hour or two on this game’s battlefield. But looks can be misleading. Any idea that this game is a cakewalk for the Syrians will last less than a minute for an experienced player, and no longer than the first two turns for anyone else. And, the Israeli player can’t even move on the first turn. That reflects a surprise attack that really worked. And the rest of the game reflects a defensive reaction that no one predicted.

The game counters may look simple – a 4-6 mechanized battalion or an 8-4 infantry brigade – but this game packs a lot of information into every move and every exchange of fire. When you attack, how you attack and what the result will be change based not only on terrain but also from day turns to night turns and on an attack sequence which allows some kinds of units to fire before others. There are some rabbits in the game designer’s hat, and he pulled them out in a really challenging way. 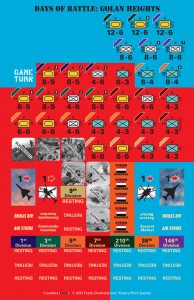 The front side of the Golan Heights counter sheet

To start with, each side has a deck of 12 cards that can influence a battle, from bringing in air power to improve the odds to slowing down an enemy unit racing to the front for an extra turn. Some cards just provide a counter-measure to the card your opponent just played. But, before the game begins, three of those cards are randomly removed from  each deck, so you don’t really know when to hold a card in reserve to block your opponent.  To add to the challenge, some cards must be played immediately, while others can be held for future use.

And, no cards are picked on either the first turn or the last two turns, But cards already  picked can be played in those last turns. And, finally, there’s a brightly colored terrain effects board. Some units get a defensive first fire when attacked, but only in certain terrain. Movement costs vary, and attackers get an advantage shooting down from a hill crest, while defenders get an advantage from being in defensive terrain.

This game does not allow a unit to move even one hex unless it has the necessary movement points. That means some units cannot enter some hexes at all unless they are traveling on a road. Villages do not give automatic defensive first fire. There is also has a strict zone of control rule. Enter an enemy zone of control and you stop moving. Leave a zone of control and enter another zone of control – even from the same unit – and you stop. Unless you are moving a special unit with commando training. That unit can move a bit further.

The first few turns will give players a chance to get a feel for the game, for the odds table, and for the mechanics of how to retreat units, how to rest units and build them up – several reinforcements arrive at reduced strength – and how to stage an attack, taking advantage of first fire rules. You get a lot of action in a small space, and after a while players will realize that having the battle so close to the Jordan River gives the Israeli player the advantage of getting reinforcements up to the front line quickly, and to defend his victory hexes on the turn he arrives.  The Syrians, on the other hand, have a lot of distance to cover when their reinforcements arrive on their side of the board. And, having so many units will sometimes clog up the roads and make it harder to get to the actual fighting. Still, it’s a game where the Syrian player has a solid chance of winning, based on the victory conditions. 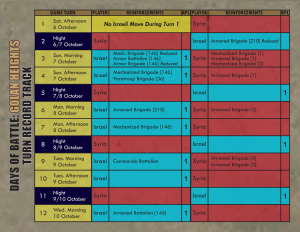 One aspect of the battle that the game leaves out – or at least gives scant emphasis to – is the struggle between the powerful IAF and the SAM system that Russia provided to the Syrians. The Israeli Air Force played a key role in the battle, breaking up Syrian attacks again and again. And, it just about broke the IAF. The anti-aircraft SAM screen was more intense than the ring around Hanoi. Israeli pilots took heavy losses as the battle went on. In this game, the air combat is limited to picking a card which gives a one-column shift to a battle. Each side has one of those cards, and neither worries about the damage inflicted on their aircraft, since the card can only be used once. I would have liked to have a little more air action. I also would like some long-range artillery fire to soften up the enemy. But, then it would become a different game, and the maneuver element which is so vital to Golan Heights would be a lot less important. You can’t have everything, and this game may already be as complex as many players would like. In multi-unit combat, you already have to decide whether to hold off an initial attack with one unit and use your armor and infantry together – with a chance of being counter-attacked first – or attack in waves. And, the attack strength for armor and infantry change from day to night.

Yes, You Get a Lot

This is, at its core, a game of maneuver. Units can die and come back, weaken and get stronger, and then do it again. So, one key to winning seems to be to eliminate your enemy entirely. While the Syrian player seems to hold all the cards when the game begins, the victory conditions give the Israeli player a distinct edge. All four victory hexes are on his side of the board. So, if units are traded off in battle, the Israeli comes back in the best place to take those four key hexes, while the Syrian has to move all the way across the board. And, with the right cards played against him, it can be harder than it first appears. The odds table makes it likely that a unit which is hurt in an attack will have to retreat. The maneuver element comes in because units that cannot be retreated through an enemy zone of control are eliminated. That’s the maneuver part. It puts infantry units at a real disadvantage in an attack, especially if some terrain feature holds up their move even by just one critical hex and they can’t surround an enemy unit.

Frank Chadwick, the designer of Days of Battle: Golan Heights

After playing this game a few times, I get the feeling that I will have to play it several more times to really get to know it well. The changes in day and night attack strength, change in attack sequence, and the terrain penalties and defensive advantages – which I thought would be second nature after a few rounds – are hard to all keep in mind without using the terrain effects chart as a cheat sheet a lot more than I expected. It’s a little like reading a Russian novel and realizing you need a list of characters just to keep everyone straight – not a bad thing, just something that takes a while to get used to. It may all sound confusing. But, you can also think of it as a gift that just keeps giving more challenges. And, isn’t that why you play war games? 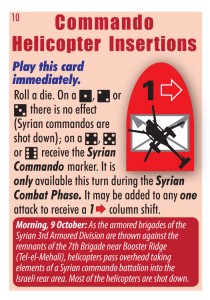 A sample card from Days of battle: Golan Heights

The cards, which come totally at random, can have a powerful impact on a particular round of battle, but when you get them – and which ones you get – is just the luck of the draw. Literally. They certainly add to the fog of war, since you can’t be sure what will happen as you try to move your units around and carefully work out combat odds, and can sometimes be as significant as a die roll. Certainly, the players quickly slip into the mind-set of the Israelis and the Syrians when the battle broke out. The initial plan worked really well for the Syrian side, and not at all well for the Israeli side. But, there is a big struggle to get through before the game ends, and – I suspect – most players won’t know how it ends until they get to the finish.

And it won’t ever be the same battle twice.