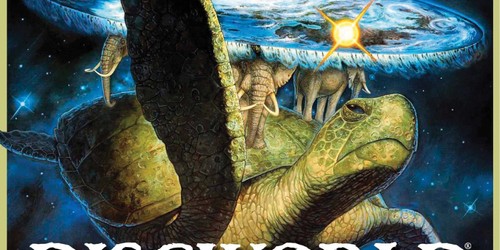 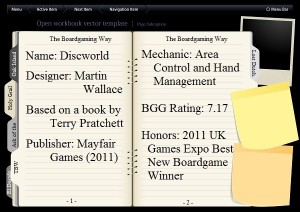 Sometimes you  buy a game thinking you will really enjoy it, but when you start playing, you find that the mechanics don’t work right, or the rules are too cumbersome or – after investing a couple of hours of your play time – you realize that its just not worth the effort.

Other times, you are pleasantly surprised. The game is better than you thought. You don’t have to read the whole rule book four or five times to understand how it works. Its what keeps us buying new games over and over again, willing to put up with the clunkers for the chance of getting a really good one.

For me, Discworld is the gold nugget in the Cracker Jack box. It hits the sweet spot on so many levels that its hard to find anything to complain about. Except, maybe, for all those little colored wooden markers you end up scattering across the board.(I’m beginning to think that little colored wooden markers are taking over the entire gaming world, spreading and growing like Tribbles on the Enterprise. But, that’s paranoia talking.) 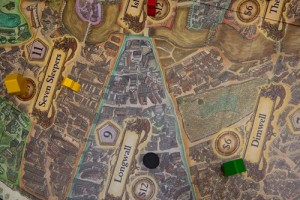 Anyway, the game is set in the fantasy city of Ankh-Morpork, the biggest, smelliest city on Discworld. The board shows its various neighborhoods, irregular-shaped areas which players can get control of and building, represented by – oh, drat – a colored wooden marker.

And, they can keep it as long as they have an agent in the neighborhood.

It may sound like a classic Euro-game, but you can kill off other agents. You can even destroy someone else’s building. And, you can spread chaos into a neighborhood, which makes it impossible for anyone to build there, no matter how many agents they have.

What makes Discworld really great, at least for me, is the hidden victory conditions. They are really hidden.

Each player picks a card representing a character, which shows what they have to do to win. Some win if they own enough buildings, others if they have spread trouble into a certain number of neighborhoods. Or, if they may win by keeping order and eliminating trouble spots. One player wins if you go through the action deck and no one else has won. Three of the eight victory condition cards are the same.

Its a system which actually lets a player try to block another one from winning, only to take an action which  just might give them the game. 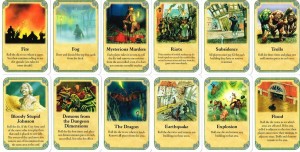 Discworld gets high marks for its artwork, for an attractive map to play on and for scores of action cards – each showing a character and the special actions a player can take using him, or her, or it. Those actions, by the way, are optional. If you think taking an action will help an opponent more than it will help you, you don’t have to take it.

There is one exception. Some of the cards have a special event symbol, which must be followed. Of course, its not clear what taking that action will do to you, or to the other players.

(To be fair, I am compelled to note that the devils are really little colored blocks of wood with horns on the top).

There are lots of options for players, and – since their actions are limited by the action cards they draw – every turn will come down to a choice between making money, spending it on buildings, spreading your influence or blocking the actions of another player. And what you do on turn three might not be at all useful on turn seven.

To steal a line from Tolkien, you can write a lot about unpleasant things, but enjoyable ones don’t really leave you much to say, except they are enjoyable. So, some quibbles:

In short, I love the art, I admire the rules, I enjoy the randomness of the cards that drive the game and I even appreciate the uncertainty of never knowing just when or where that dragon will strike. There’s also a strategy which lets me win by causing trouble – which happens when two different players move into the same neighborhood.

Heck, for all of that, I’ll put up with all those little colored wooden markers.

The Secret History of the Ankh-Morpork Areas