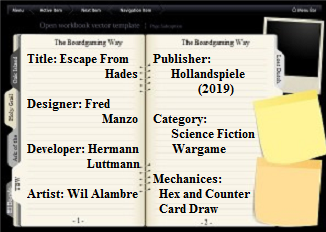 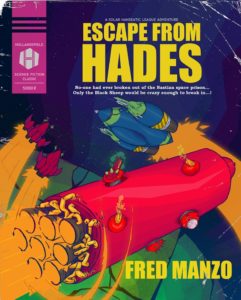 Please feel free to ask any question you have concerning “Escape from Hades,” either in this articles comment section or on the “Escape from Hades” Boardgamegeek home page (linked below) from which the original questions and answers were obtained. I’ll try to answer each question as soon as possible.

I want to thank everyone who took the time to contribute to the creation of this page. – Fred

Q: Do people treat the numbered hexes (without a real border) as an actual hex or just an indicator of how the two sides are connected and the only real hexes have a solid white boundary? The rules seem to indicate they are “real” hexes, but the graphic design screams that they are just there to help you connect the solid outline hexes (which is how I chose to play). Ultimately, it probably doesn’t matter that much.

A: (Clarification): The numbered hexes are highlighted to show they are the same hex. A counter in one hex is also in the other. They are one location as that’s where the maps overlap when they wrap around the cylinder. Otherwise, they are just like any other hex.

Q: In my current game, Princess Emily was attacked and the combat result was +1 in favor of the bad guys. I looked through the rules but couldn’t see what anything specific so I’m assuming she was eliminated from the game and is a casualty?

A: (Clarification) Yes. She’s eliminated. Her counter has only an “Emily” side and a “Closed Hatch” side. So it’s a one-step counter. One hit would normally send her counter to its damaged side if she had one, but she doesn’t.

I’d base this on section 14.1 Scoring “- 1/2 VP if Emily is removed from play or left behind on Hades.” And section 4.0 Combat Resolution: “+1, the defender is depleted,” plus “when a fresh unit is depleted, it is flipped over to its depleted side,” and “when a Unit is Destroyed, it is removed from play. SHL losses are permanent (return the counter to the box)…”

Q: If a Nasty Surprise card states to place certain units (i.e. Soldiers) on each Guard Tower, what should I do if I don’t have enough of those units left to place? Should I just pull a random unit for the remainder?

A: You place what you can of what’s specified, and fill in the rest as best you can.

Same thing if it’s during the Reinforcement Step and the cup is empty – you place what you can, as accurately as you can.

I could find no reference to a defensive complex in the rules. What does that mean exactly? Is it any Complex that has any Surface Installation on it? Or does the word defensive limit it to weapons like the railgun?

A; Defensive Installations” are those that can not fire at the SHL Vittles. So any operational SI that is a Radar Dome, or a Troop or Flight Elevator that is not capable of offensive fire is, therefore, a “Defensive Installation” and sometimes release its extra troops.

If a fully operational Surface Installation is not capable of hitting the Vittles it gets to release reinforcements, under the theory that well-working “Defensive Installations,” such as a Flight Elevator (which has already done all it can for the Nastian cause) would have an incentive to release troops to the fight. The rule was included to provide players with an incentive to damage even those fully operational Surface installations that are incapable of firing on the Vittles.

A: That is a very good question and one I never thought about before. But as I once heard Jim Dunnigan say “you may think your design is fine, but once 5,000 pairs of eyes look it over they’ll find problems you would have sworn weren’t there.”

So to answer your question I’d say “no. The fighter can’t effect an out-of-system SHL Vittles.” And I’d base it on section 7.2 “When the Vittles is ‘Out-System,’ it cannot be attacked but it also cannot itself attack…”

A: Cards such as NS-12 states “The highest numbered Destroyed SI not occupied by SHL-friendly forces is upgraded to fully operational status.”

A: Just entering the Complex’s Purgatory support hex destroys the SI. Fighting any Nastian on its Inferno deck is unnecessary for this destruction to happen. The reason it would work this way in this universe is that first, the support hex is full of unarmored parts of the SI machinery. Shooting up its targeting computer or pulling out some of its wiring is a minor undertaking in the general scheme of things and second, the Nastian combat unit on the surface is probably outside the dome. It would only be in the way if it was stuffed inside a working Railgun turret when an attack was underway. So its ability to react fast enough to stop forces on the other deck from ripping out wiring would be severely limited.

Q: If the HQ Request action is successful and 3 new units come in, can those units then immediately activate during the current SHL phase or are they considered ‘done’ and have to wait until the next turn to activate?

A: (Clarification): Moving units as reinforcements from the Vittles to the Hades is their one and only action for that turn. As for what is brought down that’s up to the Player. If you want it’s ok to bring in 3 HQs at once but that’s it for them for this turn.

That is, reinforcements are activated and are marked done when they arrive.

Q: (Clarification):  How does Dante occupy his Lab on the Vittles? Does he have to be evacuated back to the Vittles on one turn and then the following turn he can use the Lab?

A: Yes. In other words, say he’s on Hades, he has to be evacuated to the Vittles. Section 12.7 Dante’s Lab states “Professor Dante may occupy this module space if he is aboard the Vittles……(While aboard the Vittles, Dante can be activated to move to the Living Quarters and Bridge, which might be a good idea if the lab is on the chopping block.”

So Dante can easily get to his lab by evacuation from Hades directly there. But that’s it for this activation. He can then leave the lab by his next activation back to the Vittles Bridge. Once in the Bridge area he is again eligible to be sent back to Hades’ surface. If you read the evacuation/reinforcement section 6.7 carefully you’ll note that it doesn’t actually mention what status the units evacuating or reinforcing must be in, so you can move already activated units to or from the Vittles by activating an HQ and performing an evac/reinforcement action by the HQ. This is a great move late in the game (E.G., The last unit on Purgatory may race to the surface with one activation and an HQ on the surface who hasn’t yet activated can then activate and move them both to the safety of the Vittles bridge.)

Q: May the Vittles skedaddle our of system if parting shots happen to eliminate the last warp engine? Or would the ship stay in-system?

A: It’s happening “simultaneous” with the movement, not before, so I would say it still warps out of the system. Of course, it will need to repair at least one warp drive to warp back in.

Q: Would a fighter be spawned in the case it was the fighter elevator? I presume it would, but just curious.

A; (Clarification): Yes, that was what I attempted to convey in the sentence: “The moment it first becomes fully-operational, the Flight Elevator adds its only fighter to the Combat Oribatal Patrol box.” Sorry if that was confusing

Q: When the bridge computer is hacked via a science action (6.9), is one locked door opened as well as one trap disarmed and removed? Or would it be either/or instead of one of each?

Q: What happens to the Loot if the pro-SHL unit carrying it is killed? Is the Loot destroyed and gone forever, or is it able to be picked up by any pro-SHL or Nastian unit that passes through the hex?

A Treasures, that is, the contents of the Loot Cellar and the Golden Idol, are never targeted or destroyed as they are valued by both sides. They may be carried by any SHL or Nastian force. If that force is attacked and eliminated the treasure is left unharmed in the targeted hex. If a treasure is recaptured it will be carried around by the counter that recaptured it freely. SHL captured treasures can also be freely carried and even teleported with their guardian unit to the Vittles. (They are lightweight). See rule 11.0 The Circles of Hades, under its Golden Idol Shrine and the Loot Cellar section.

Q: if the Electronic Warfare room is destroyed in the middle of the SI attack phase, do the newly repaired SIs get to also attack in that phase? What about if the fighters destroy it in the previous sub-phase?