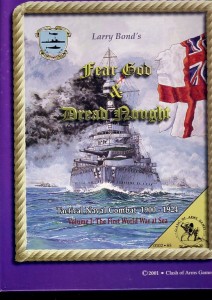 Any book is new until you read it.Be careful what you wish for, you might get it.

An hour to learn, a lifetime to master.

Pick any of those three sayings, and it fits Fear God and Dread Nought, but none of them  – alone or together  –  will give you a fair understanding of what is, essentially, a monumental detailing of naval warfare in World War I.

It shouldn’t be an obscure topic, not when you realize what happened as the first great world war broke out on and under the oceans.

The first true battleships were born. Submarines became a real threat to surface craft. Navies learned to use aircraft to sink ships. Radio became a tool to coordinate fleet actions. Torpedoes became powerful weapons that could easily sink an armored ship, minefields could be deployed, and mine sweeping became a necessary counter-measure.

You are not just  getting a game with Fear God and Dread Nought , although there is one in there, and a nice one at that. Consider it a bonus feature.

When you open the box, you are taking out a  system to evaluate, compare and use all of the weapons and all of the defenses that were employed during World War I naval warfare, including air attacks,  spotting and attacks on shore facilities.

It’s an open system that requires charting and written orders, and reflects the problems that take place when those orders weren’t properly received or properly executed. And, yes, you can run aground if your near shore action turns unlucky for you. 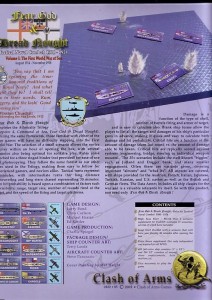 Some might find it a graduate course in seamanship. Play enough naval battles with simple game rules, and you can actually believe ships turn neatly on command. Perhaps they must go in a straight line before beginning their turn, but not much else has to be factored in.

Fear God and Dread Nought has ship classes that determine how sharp a turn you can make. But you also have to calculate the loss of speed in some turns, the different effects of turning on cargo ships with less power than warships, the impact of rough weather and the possibility of a rudder jamming.

That’s after checking that the signal to turn was passed down the chain of command, and that the crew performed it properly. They didn’t? Well,  that’s  what naval Captains had to deal with, and usually at the worst possible time.

There’s no map in Fear God and Dread Nought.  The authors suggest using an 8 by 8 foot table. They also suggest that you can play a more realistic game by having one player act as a judge who can look  at the written orders, chart where two opposing fleets are going, and tell the fleet commanders when they have a sighting. 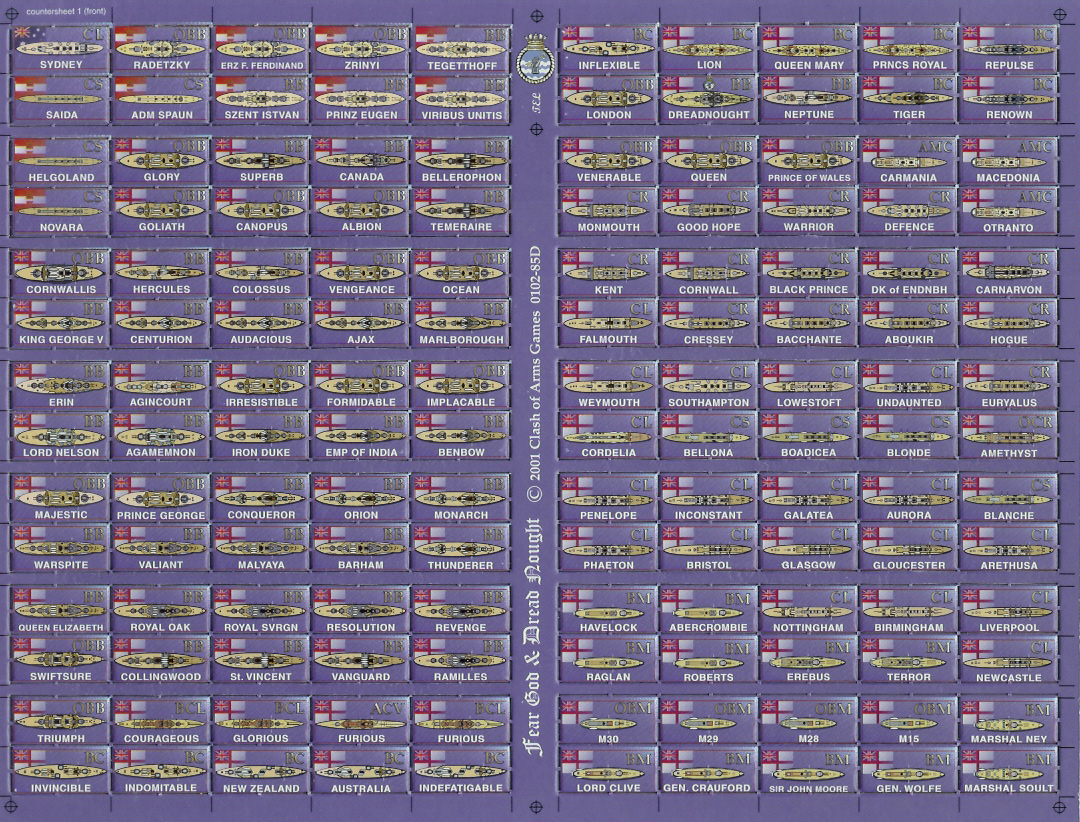 There are nearly 300 named ships  in the game’s counter mix – American, German, Italian, Japanese and Russian – as well as a few lighter-than air ships, and a fleet of airplanes. They’re all on cardboard markers, with silhouettes on the reverse side to show the difference between large and small ships. You can’t always identify a big ship at long range or in bad weather until it opens fire.

There are also a half dozen generic submarines, destroyers from DD01 to DD42 and some tankers and trawlers and colliers. For shore attacks, there are naval guns and casements and search lights, while for the deep ocean there are lone torpedoes and torpedo spreads.

You actually don’t need ship models at all. Just accurately chart your movements, have each ship marked on your chart, and the whole battle can take place on paper. But,  models on the table are more fun.

Helpful supplements are included for military history buffs as well as casual gamers. The High Seas Fleet data annex gives the background on the ships and aircraft available during World War I, while the 100-page scenario supplement provides actual match-ups, “what-if” match-ups and maps to allow do-it-yourself battles. The “jumpstart” booklet gives a rules summery and some good illustrations of battle orders, as well as ship reference sheets and aircraft data cards. photocopy them before you start playing. 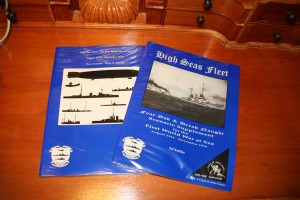 While the data collected in this game is almost endlessly deep and deserves a spot on any serious wargame reference shelf, the success of the authors and editors comes with one small problem.

This is as far from a beer-and-pretzels game as you can get. As previouisly noted, you can’t just roll some dice and see what happens. Making  fleet movements involve giving written orders or flag signals, accurate charting is necessary, and there may be some “delay of action” turns while two hidden fleets find each other.

This is navigating before radar could spot an island or a GPS could provide an accurate location. Shell penetration depends on distance, and you have to measure that accurately. And commands take time to get down to individual ship captains.

There is one handy chart that makes it easy to replace the cardboard ship counters with metal miniatures. Since range matters, scale becomes important,  and ship size and movement have to be consistent. The chart does scale conversion for you.

The pay-off comes from facing the kinds of problems that made fleet commanders earn their pay. The  action gets really intense when it happens.  Hours of boredom, minutes of terror, a lifetime of glory.

Of course, you can shorten the boredom by tweaking the scenario. Heck, avoid night battles and fog if you like.  Just be prepared to  have your friends make fun of you after you leave the room.

There is one more point to be made here. Just how many friends will you need to play? Or to properly recreate a naval engagement?

The answer varies. The simplest scenario, trying to intercept a ship laying mines, can be done with two or three players a single evening, especially if someone makes up the sheets for the ships ahead of time.

One player can act as a judge to  take advantage of hidden movements. And, you can photocopy the sheets for your favorite ships, which will speed up play a lot but limit your scenarios.

If you want a battle with many ships, aircraft, shore installations, submarines and minelayers, you might have a half dozen people or more on each side. And, you might end up with a game that takes a long time to play. You will need some dedication. This is not a casual encounter.

A long time ago, I bought a copy of War In Europe, the classic SPI game that wrapped together  War in the East and War in the West. My group played it twice, once in my basement, and the maps covered a ping pong table completely with a little side extension for the Iberian peninsula. The game took about as long to finish as the real war did, and we had a rotating cast of up to a dozen players.

The point is, there is hope you will get the right group together to really open up Fear God and Dread Nought and see all the things it can do.

Planning, luck, good odds modifiers and all the other bells and whistles will make setting up a battle well worth it. At worst, even if you play only a few small games, you have one of the best naval reference collections in a single box that I have ever seen, and playing solitaire will become a whole new experience.

And, you will see how hard it was to lead a naval fleet.

One of my favorite metal miniatures naval games is still Age of the Dreadnought, an old but elegant classic where you mount ship models on bases that get larger as the ships get heavier, and which uses printed arcs to show the tightest turn that a ship can make.

But, those fast little ships have to get in close to fire torpedoes, and most of your ships bristle with short-range guns that can destroy them before they can launch their fish.

Those ships are all rated for armor and gunnery. And, once the ships close, it can get brutal.

That game gave you the names of ships and ratings for speed and armor and gunnery, but it didn’t provide much more than the relative size class of the big guns and  a relative range of armor thickness. 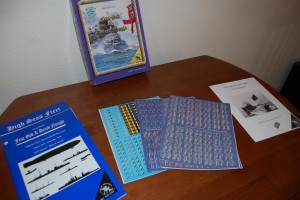 It didn’t have enough ships either. But, it was easy to go back and calculate the gunnery and armor for ships not included in the game. That work required what became my World War I naval bible, Conway’s All the World’s Fighting Ships 1860-1905.

It is, I was happy to see, one of the books listed in Fear God and Dread Nought’s annex bibliography. In some ways, this one is better, because it provides an easier way of comparing the fighting ability of ships.

Conway has more extensive background on some ships, and also includes all the navies of the world. You can create a what-if fight between the coastal defense navies of Chile and Argentina, or look up the three-masted Kaimiloa, a gunship purchased in 1886 by the King of Hawaii which became the only ship in its navy.

German ships used 16 different torpedoes, and the rules let you use any one of them, provided you have the right tube size and your scenario is for the right year. Every ship, naturally, has its in service date listed in the same book.

So, enjoy playing. Learn some of the things about naval combat you never knew before or may have forgotten over the years. And, remember to Fear God and Dread Nought.