The Other Forgotten War 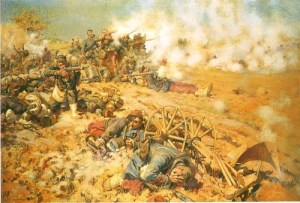 August 16th marks the anniversary of the Battle of Mars-la-Tour and August 18th the anniversary of the Battle of Gravelotte-St. Privat, both fought in 1870 during the Franco-Prussian War. These two battles were titanic struggles, yielding approximately 60,000 casualties in total. Both battles were tremendously important military events when placed into proper historical perspective. In fact, Bismarck himself stated that the Battle of Mars-la-Tour – “beyond argument” – decided not only the Franco-Prussian War, but the future of Europe as well. The subsequent Battle of Gravelotte-St. Privat, two days later, sealed that fate by locking the French Army of the Rhine into its tomb at the Metz fortress. These battles simultaneously killed an aging French Empire and gave birth to a new German Reich.

Two such important battles fought in a war that, despite its undeniable influence on European and world history, seems to garner little attention or enthusiasm in the wargaming community. Aside from the obvious historical importance of the conflict, most of the battles were hard-fought, brutal affairs with the Prussians suffering the majority of the losses. Yet most gamers hold to the prevalent misconception that all Franco-Prussian War games are “slam dunks” for the Prussians…..