The deluxe edition and update of the classic Solitaire game, IN MAGNIFICENT STYLE. Refight Picketts Charge at Gettysburg.

“In Magnificent Style” is a solitaire game depicting the final desperate Confederate attack on July 3, 1863, at the Battle of Gettysburg. You command the Confederate brigades that made Pickett’s Charge. 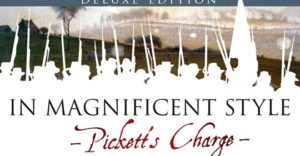 General Lee’s Army of Northern Virginia has been fighting General Meade’s Army of the Potomac for two brutal days at Gettysburg. Lee’s army has garnered some successes but could not achieve that decisive breakthrough of the Union lines. On the third day Lee, despite resistance from his trusted “Old Warhorse” General Longstreet, decided on a massive assault against what he deemed to be the weak spot in the Union battle line. This dramatic, infamous assault is popularly known as Pickett’s Charge…”