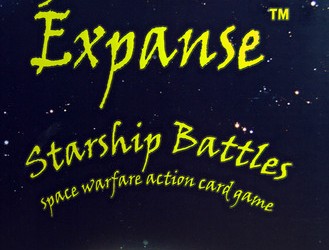 A few months ago we played Galactic Expanse: Starship Battles. Or at least we tried to.

GE is a two to four player card game designed by Jeff Billings of Sergeants Miniatures Game fame. It was published by Lost Battalion Games in 2006 and comes with 6 dice, various colored wooden cubes and two good quality card decks: a spaceship deck and an action deck.

The action deck includes planets to target and random events, like core breaches and assorted dual-use attack orders. Starships come with their own strike fighters, torpedoes, railguns, beam weapons, shields, troops etc. Each type of attack and defense has its own rules section. So when you fire, say, a railgun at a strike craft you look up one paragraph, but when you fire a beam weapon against a shield you look at another. Combat is abstract. For example, a ship with good beam weapons, say, would fire a D6, D8 and a D10, while the defender with poor shielding might counter with only a D6. The highest die wins. Doubling your opponent’s highest number destroys the ship, while simple damage generates negative modifiers for the next battle and allows the activation of special events, such as a reactor core breach. Plus there are four different spacefaring races with their own ship types and optional rules. 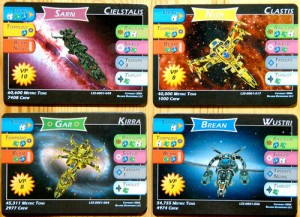 Galactic Expanse reminds me of such other Beer-and-Pretzels games as Brawling Battleships – Steel or Ad Astra. Especially Brawling Battleships – Steel. Each of these games comes with a deck of ship cards and a deck of action cards. Each is a tactical combat game that mostly involves cards, dice and cubes. Each has duel action random event cards and takes about two hours or so to play. Both have ships armed with multiple weapon types and both uses 6 ships per fleet action in two rows of three and in both a destroyed enemy ship produces victory points.

As for how close they actually play that’s harder to say, seeing that we were little more than guessing about large parts of GE. You see the Galactic Expanse: Starship Battles rule book needs A LOT OF WORK. Now, there is an old rule of explaining that says “when conveying information, first tell them what you are going to tell them, then tell them, then tell them what you just told them.” And this game’s rule set leaves out at least two of those steps, maybe all three.

In addition, there aren’t examples of play, which is a sure sign of trouble, and the symbology on the cards raised a number of questions we had to settle between ourselves if we were ever going to finish the game.

But, don’t get me wrong. There is the basis of a good game here. It just looks like it was never completed before it was published. I’d say if this game was given a second edition, an on-line FAQ and some publisher’s support, such as links on Boardgamegeek, After-Action-Reports or a video tutorial we’d end up with something solid. In fact Lost Battalion Games apparently once had a very good example of play for this game on their web site, at least there are still links that lead to it. But for some reason it was removed.

In the end we did play for a few hours and while I’m certain we didn’t play the way the designer intended, we had some fun. So we’ll probably give it another try, as you might want to, if you are not upset by games with large slabs of ambiguity.