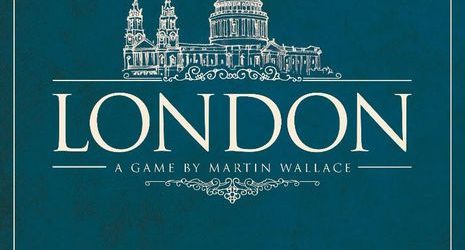 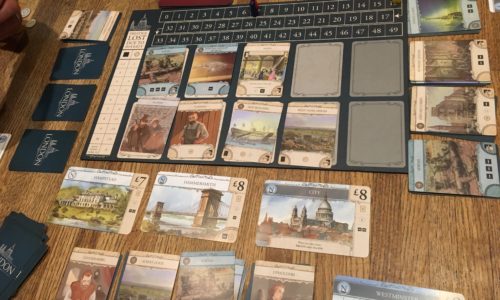 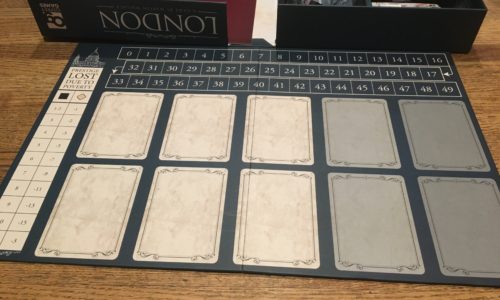 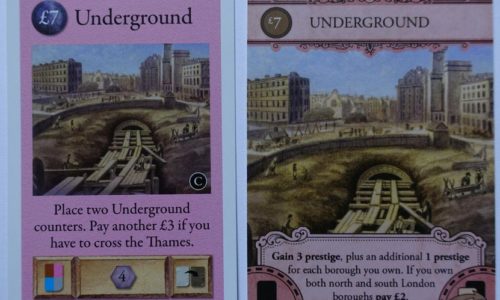 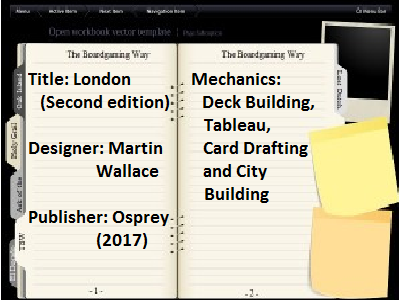 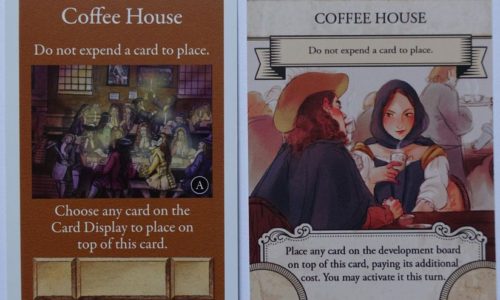 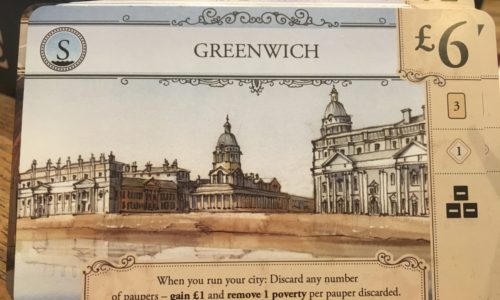 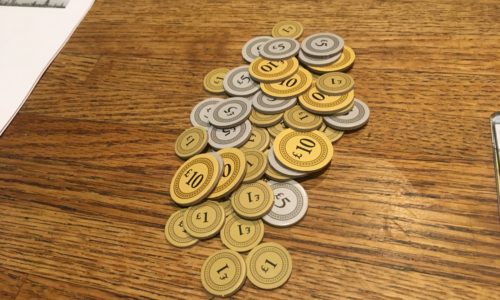 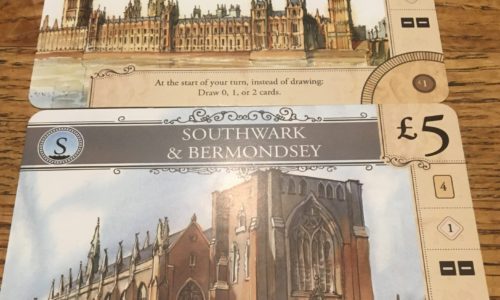 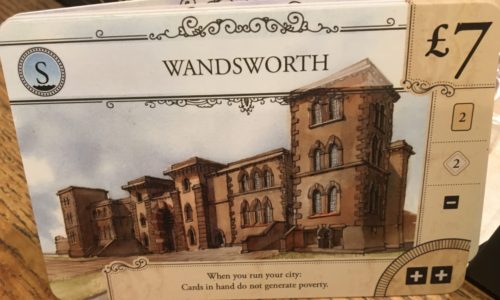 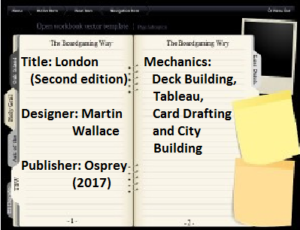 Is it fair to say that a Martin Wallace game is like a box of chocolates?  You know – you never know what you’re gonna get.

Well, that’s true as far as it goes. A Martin Wallace game can be on any subject, and will likely have some quirky rules that take it to places where – to steal another phrase – no game has gone before.

There are themes in many of his games, of course. Economics. Growth. Unexpected disasters. And rules that let you watch one player get further and further ahead until the game ends and you find they really had fallen behind.

Each game seems to have its own special quirks – not that I’ve played them all.

Which brings us to London – a re-issue of Wallace’s popular deck-building game based on the reconstruction of that great city after it was gutted by fire. Not that you need to know the history to play it. It is a little simpler than the original, and it’s still set in 1666.

The time and place seem to be a perfect fit for the game rules, although it might also have been placed in Atlanta after Sherman marched through, or Nagasaki after the atomic bomb dropped. But, if Wallace were designing it, I think that imaginary game would have played a little differently. 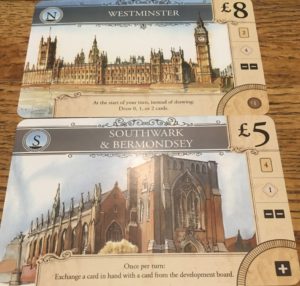 At its heart, this is a deck-building game. And, what a deck. You get 101 nicely-illustrated city cards and 20 bigger borough cards, each showing one of the iconic buildings in that part of the city.

You get the city cards for free. They are dealt to every player, and most players will get a chance to pick up most of the cards, even the ones in an opponents hand.

You have to buy the borough cards, but they do wonderful things and players always have their choice of three. Need money? just borrow it from the bank. But, be careful. At the end of the game, any loans you can not pay off will cost you victory points.

And, it being a Martin Wallace game, those borough cards – and the city cards – do other things as well. They give you money, they give you prestige points and they increase or decrease the poverty in the city you are creating with your city cards.

Time for a quick aside. Those prestige points will win the game for you, but you get some immediately and others only at the end of the game. Choose your cards wisely, or – at least – keep track of what’s happening. Buying the borough cards will get you prestige quickly, but borrowing money to get them could turn into a real problem. 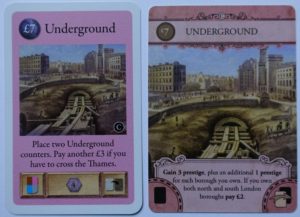 Debt is what you owe to the bank. Poverty counters represent the effect of what you are doing to the entire city. Both will hurt you at the end of the game but in different ways. And, the player with the fewest of those little black squares won’t be hurt at all.

It sounds like a lot to keep an eye on as you play, and it is. And then Wallace throws you another curve. You can have up to nine cards in your hand. You play them, face up, putting them down in front of you. Fine so far.

But to put down a card, you have to discard another. Not so simple. There are four background colors on those city cards, and you have to discard one of the same color as the one you put down. Easy with lots of cards in your hand, but if you run your city with a lot of cards in your hand – to get the benefits of every face-up card in front of you – you also get one poverty cube for each card you hold.

And, when you put a card down on the discard board, any other player can pick it up. It just sits on the development board until so many cards discarded that room runs out and the oldest ones are swept off the board forever, replaced by newer ones. Decisions, decisions.

London plays a lot quicker than it sounds. The game moves so smoothly you hardly notice all the things going on, not when you have to agonize over which card to play and which to throw down as a discard.

Now the rules are elegant, the cards are beautiful, and the history and the potential for victory almost ooze out of the card deck. And, every move you make has consequences.

You can make or borrow money to buy more of those big borough cards, or you can put down city cards in front of you that will make you money when you activate your city.

Of course, activating them creates poverty – one little black cube for each pile of cards in front of you and one more for every card in your hand.

Reducing the number of cards in your hand will cut back on poverty, but that might put you behind in development.

Or you could take out loans, which have to be paid back at the end of the game, or you will lose points. An decisions, decisions again.

I think it’s Martin Wallace at his best. But, that’s only my opinion. 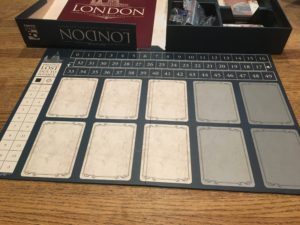 Now, the game isn’t perfect. The discard board should be redesigned. Am I harping on this? Yes. There’s not much else to complain about. Add some color, maybe. Some ornate design around the rows of cards you play on it. Some Beefeaters on parade or Lord Nelson at sea. Anything.

But the board is simply a cardboard rectangle with space for the discards.

Now, I could wax poetic about the elegant simplicity of the board, a tabula rasa – a blank slate to you non-classicists – on which to place the discards of the city you are creating. And, it’s a fair point.

In truth, it was a lot more attractive in the original version of the game, put out by Wallace’s now-defunct Treefrog Games. You can find it online if you’re curious. Happy hunting. 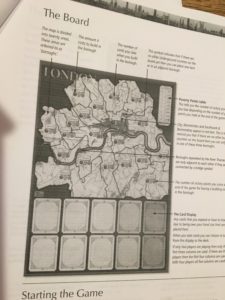 A black and white photo of the first edition board from the rules. (Click to enlarge).

That board had room to put down discards, but it also had a lovely map of London, showing the 20 boroughs. And it had counters that let players build and extend the underground – a subway system for those on this side of the Pond.

This game does let you build a railway station – it’s a city card – that gives two pounds for every borough you hold on one side of the River Thames.

Do I hear a sigh of relief somewhere? Too much of a good thing? That’s a Martin Wallace game for you. You gotta love it. 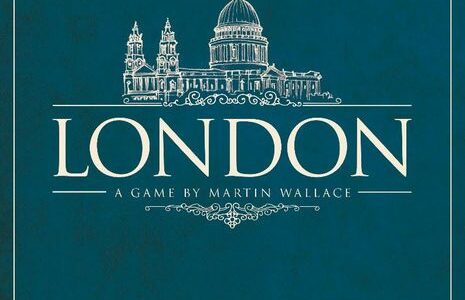 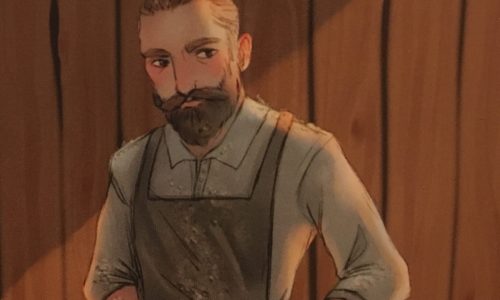 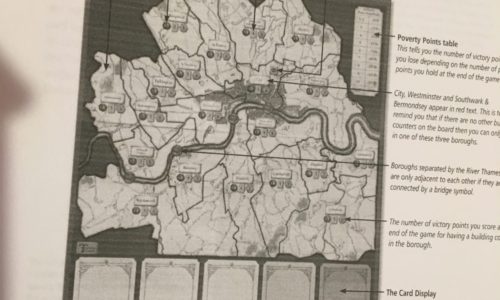 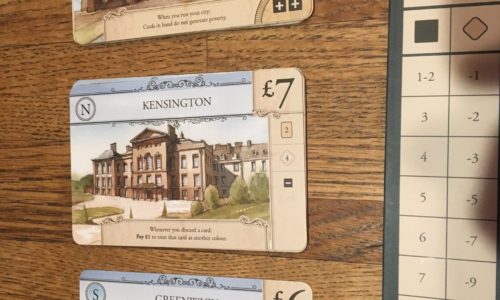