New “Invaders from Dimension X!” scenario to be published in Yaah! #7 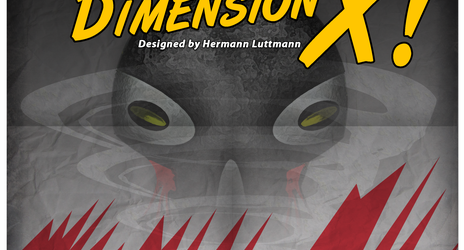 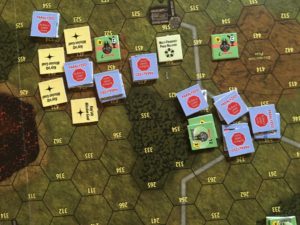 Hermann and I playtested a new scenario of “Invaders from Dimenion X!” It is scheduled to be published in Yaah! magazine Number 7, by Flying Pig. 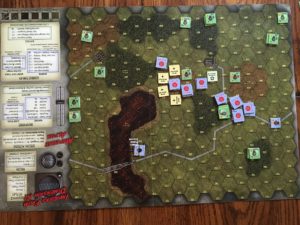 It involves 2 new counters; one for the Invaders and one for the Galactic Marines. The Invaders counter is “The Harvester of Souls” and the Marine unit is the “Yaah” gun. 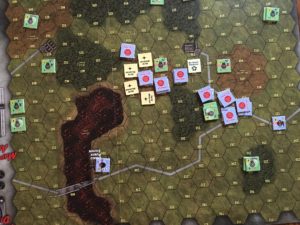 In this playtest the “Harvester of Souls” has already been eliminated by a shot from the Marines “Bump” gun (its especially effective against particularly clever pan-dimensional beings). But the Kay-otz mission markers, which are doing double duty as prisoner-of-war counters in this scenario are starting to be teleported to Kay’otz central. This playtest ended in a minor Marine victory, we knocked out the “Harvestor,” held all the support buildings and saved half of the POWs. But we ended up with a good half of the battalion stunned or paralyzed. The Marines (played by me ) were doing just fine until the Multi-Frequency Phase Nullifier dropped in the middle of my position. That’s where all those “paralyzed” markers sprouting up in this photo came from. We are about half way through the playtest, but it took me a good 5 turns to work myself out of this fix and into a minor vistory.