Next “Blind Swords” game announced: “We Are In For It” 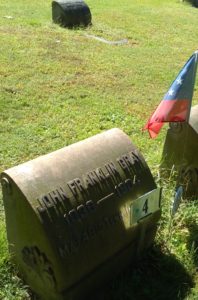 By Claude Whalen and Fred Manzo

[Note: The next game in the “Blind Swords” series will be published by the summer of 2019. Its designer is Claude Whalen, one of the major playtester for Revolution Games’ “Longstreet Attacks” and it will cover the civil war battles of 1st and 2nd Kernstown. Plus Rick Barber will be doing its map.

Claude’s working title for the game is a quote from Stonewall Jackson: “We Are In For It.”

1st Kernstown was fought in March 1862 between Stonewall Jackson and Nathan Kimball. Stonewall was outnumbered two or three to one, and the battle is usually considered a tactical Union victory but a strategic Confederate victory, as it was part of Stonewall’s Valley Campaign to diverse Union troops from approaching Richmond.

Second Kernstown was fought in July 1864 as part of Jubal Early’s raid towards Washington. Jubal’s opponent this time was George Cook. Second Kernstown was one of the few battles in the civil war where the Confederates outnumbered the Union forces. It resulted in a Confederate victory and allowed Early to launch the last major Conferedate raid into northern territory.

Sewickley is a small town 15 miles northwest of Pittsburgh, Pennsylvania but for one Civil War game designer, “it is another dimension, a dimension not only of sight and sound but of mind. A journey into a wondrous land whose boundaries are that of imagination. That’s the signpost up ahead – your next stop, The Twilight Zone”. 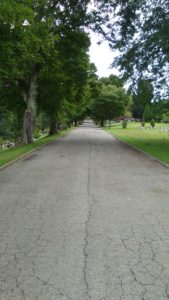 The main road in Sewickley Cemetery

Meet Claude Whalen who is working on a “Blind Swords” system game on the 1st and 2nd Battles of Kernstown. Two battles which were fought over 153 years ago just south of Winchester, Virginia yet for Mister Whalen, these battles are much closer to him than he ever dreamed. His “what are the odds” questions start to turn into “can this really be happening?”

First, a little bit about the games themselves:

The Battle of 1st Kernstown is both Stonewall Jackson’s only true defeat and a smaller battle that is ideal for the “Blind Swords” system. For a very quick training scenario, the Union attack on the “Stone Wall” at Kernstown allows players to learn the “fire-move-melee” sequence of Hermann Luttmann’s system. The historical Full Battle scenario of 1st Kernstown is a great example of the “Command and Control” portion of the “Blind Swords” system. The CSA player needs to use his Event Chits properly, fight until Jackson has racked up enough victory points (and prove his point to the Union) and then get his army to safety. In the “What If” scenario of 1st Kernstown, Jackson does a much better job of managing his attack and the Union forces are not hamstrung by bad orders. Jackson has the chance to rack up even more Victory Points, but now Sullivan’s Union troops are dangerously mobile and could cut Jackson off. 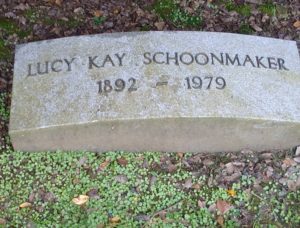 Lucy’s grave: the old woman at the end of the road on which I lived as a child (less than 3 miles and 7 houses away)

The Battle of 2nd Kernstown includes three scenarios. The shortest scenario involves CSA General Breckinridge’s (former US Vice President 1857-1861) surprise flank attack, which allows the former Vice President to team up with George Patton’s grandfather in an attack on future US Presidents Rutherford B. Hayes and William McKinley. With the “Fog of War” chit, players have the chance to kill off a future US President or alter US military history. In the Historical Full Battle scenario, just about any Union player will be able to do a better job than General Crook. The CSA player will be hard pressed to rout the Union forces as severely as they were routed historically as no player will press an attack as Crook did. 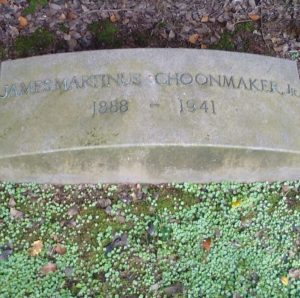 The Colonel’s son (note the missing “S,” he had no children to tend his grave-site).

In the “What If” scenario of 2nd Kernstown, the Union cavalry forces that routed off-map in the historical battle are available and so Colonel James Martinus Schoonmaker makes his appearance (two months before he wins the Congressional Medal of Honor for his actions at 3rd Winchester). With these extra troops, General Crook has a more realistic chance at bloodying General Early’s nose and then escaping to safety.

For many years, Claude has walked past a set of neglected gravestones and he remembers the old woman buried there as a woman who lived at the end of the road where Mister Whalen grew up. She would occasionally be chauffeured past Claude’s house and sometimes he would actually see her on the street and say hello. While working on the Order of Battle for 2nd Kernstown, Claude sees the name, James Martinus Schoonmaker, as a commander of a Union Cavalry Brigade. It is an odd name but one that seems vaguely familiar, then he realizes that the old woman down the road had a name similar to that one. So on one of his walks in the cemetery, Claude walks over to the neglected gravestone and sees that her name is indeed Schoonmaker (she died in 1979). Claude looks at her husband’s gravestone (he died in 1941) and pauses…..his name is James Martinus Schoonmaker, Jr! The old woman at the end of his childhood road was the DAUGHTER IN LAW of a commander at 2nd Kernstown. When Claude first started playing Avalon Hill war games at age 12, this woman was living history 108 years after the battle. What are those odds?

But wait, Mister Whalen is still in the “Twilight Zone.” 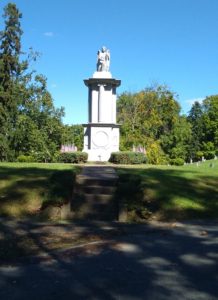 Two months later, Claude sees a guy (Brewster Cockrell) that he has known since the mid-1970’s. They both graduated from Washington & Lee University and often talk about college issues. That Friday morning was no different, and they start talking about the changes at Lee Chapel. The conversation drifts over to Robert E. Lee, then Gettysburg and then the “Blind Swords” “Longstreet Attacks” game that Claude had playtested. Brewster Cockrell comments about one of his ancestors who was killed at Chancellorsville and how he would love to buy a good game on that battle. Claude explains that gaming a surprise attack like the one at Chancellorsville is rather hard to do for anyone playing the game on a solo basis. Claude then mentions that he has been working on a game with a surprise flank attack, 2nd Kernstown.

Brewster’s interest immediately perks up, and he says that his mother’s family was from Opequon, Virginia which is just a mile or two south of Kernstown. Brewster took his mother down to the Opequon Presbyterian Church when she was 95 years old so that she could see some old family grave markers. Now Claude’s interest is piqued as that church is in the lower center of Rick Barber’s game map.

Claude asks Brewster, “what is your mother’s maiden name?”

Claude then tells Brewster that there is a “Hoge’s Run” on the game map between the Church, Pritchard House and Pritchard’s Hill (the centerpiece of the battles). Brewster was very interested and said that he would go home and check some more of his family records to see if there was anything else in his family history. Needless to say, Brewster contacted Claude within a few hours with the following stunning information:

The Church window behind my pew. Supposedly the “Good Samaritan” but it sure looks like a father cradling his dead son. Note the Temple in the background, John Travelli was killed near the Dunker Church

Brewster’s 7 times Great-grandfather, George Hoge, sold a small farmhouse and some land back in 1756 (not 1856). The buyer was Rees Pritchard, whose grandson Samuel Rees Pritchard, built the house that stood in the center of both Battles of Kernstown. Brewster’s family were the original landowners at the center of Claude’s Kernstown test map. From a chance conversation with a guy that he had known for over 40 years, Mister Whalen discovered another direct connection to his Kernstown game.

Suddenly, Claude sees American Civil War connections all over Sewickley. He knew Rosamound Fitch Richardson, the Great Granddaughter of General William Sherman. He knows many descendants of General Alexander Hays, who seem to swarm over Sewickley. The Tiffany window behind Mister Whalen’s usual pew in church is dedicated to a man who lost his son at Antietam. The step-father of Claude’s Best Man at his wedding is a direct descendant of Edmund Ruffin. The only war monument in Sewickley Cemetery is to soldiers who died during the Civil War. There is even a Confederate grave in the cemetery (Major John Franklin Gray, 48th Tennessee).