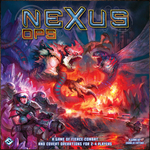 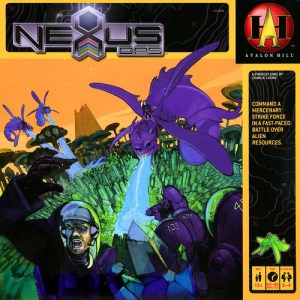 Recently we played Nexus Ops, a game designed by Charlie Catino and initially published by Avalon Hill (Hasbro) in 2005 and, in a second edition a few years ago, by Fantasy Flight Games. We used the first edition, so any comments on its component quality should take that into account.

(I’ve been told that the only real difference between these versions is their art work, which became darker and a fairly expansive optional rules section included in the later edition.)

Basically, we are talking about a 2 to 4 player tile game in which players represent various interstellar corporations fighting for control of a mineral rich moon. You can think of it as a much cut-down Twilight Imperium with a large helping of Axis & Allies and a dash of Settlers of Catan.

However, while the game’s rules talk of ‘corporations vying for control,’ they could have just as easily been describing an empire building game. Yes, you are playing as a corporation, but, no, there aren’t any stock certificates or shareholders or profits involved and there does seem to be an awful lot of fighting involved for a ‘business’ game. 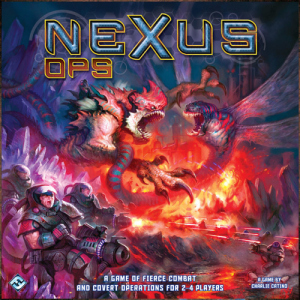 The tiles in the game represent the various types of terrain players will encounter and are placed around a central Monolith, which for some reason comes in 2 pieces (a Duo-a-lith?). Unfortunately, the supposedly ‘spooky’ Monolith’s cardboard roof spoils any effect by repeatedly collapsing during play due to the weight of any occupying figures.

Each player-turn in Nexus Ops consists of:
1. Purchasing (hiring) new units and place them in your home territory.
2. Moving units, usually one space, but there are exceptions, which are sometimes generated by cards.
3. Revealing exploration results on new tiles.
4. Conducting battles (usually of one round) on each tile mutually occupied.
5. Gathering Rubium ore from controlled mines.
6. Drawing 1 ‘secret mission’ card and, if you control the Monolith, two energizer cards.

In any event, the players initially take turns peacefully exploring the tiles adjacent to their areas. However, once the map is fully explored the game evolves into a race to control any new Rubium mines and, in particular, to occupy and hold the centrally positioned alien monolith with its special powers. Along with these objectives, players will need to accumulate as many Victory Points as possible, usually by winning battles and completing secret missions.

But, to accomplish such feats players must hire some combination of 6 different types of employees/mercenaries, with some good at mining, some good at fighting and some good at traversing the various types of terrain they encounter. 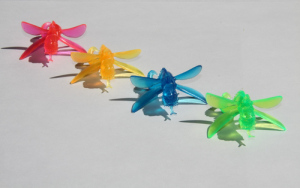 For example, players can hire:

Human miners, who are small and cheap to recruit (2 credits a piece) but cannot enter lava pools or the alien ‘monolith.’

Fungoids (the ‘one hand up  guys, named after the pose their figures have taken) who, like humans, can mine Rubium but can’t enter the monolith.

Crystalline creatures (‘the two hands up guys’), who also cannot penetrate the monolith, but fight well in the crystal fields and can mine. Unfortunately, as the Monolith may only be occupied by the toughest and most expensive fighting units, you will also need some:

Rock Striders (spider creatures), who cost 6 credits a head, and

Lava Leapers (slugs), who move two spaces when lava pools are involved and can also enter the monolith and finally the most expensive creatures,

Rubium Dragons, who are your heavy bombers. They may enter the monolith and may attack anyone, anywhere from that location.
As a result, we are talking about a typical <b>4X game</b>, with no stacking limits, with mines producing 1, 2 and sometimes 3 Rubium credits per turn and with players having a build budget in the range of 10 to 12 credits per turn.

And while it’s clear cards are deeply involved in Nexus Ops, it is not a Card Driven Game (CDG). The three cards types used are: 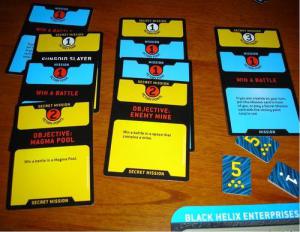 1.  Secret Mission cards, which players get every turn. Secret missions being things like ‘Win a battle in a space that doesn’t contain a mine’ for an extra VP or perhaps ‘Control more Rock Plain tiles than any other opponent’ or ‘Win a battle in a Rock Plain etc. While most of these cards are of limited value, the VPs they instantly award are extremely important seeing that they can never be taken away from you no matter how bad the tactical situation later becomes.

2. Energizer cards. Each battle’s loser gets one and the player who controls the monolith gets two per turn. They allow you special abilities like ‘You may fight a second round of a battle’ or ‘You get extra Rubium from each new mine outside you home territory.’Â They are used as a play balancing device and a reward for aggressive play. Having them is such an advantage that whoever controls the Monolith for any length of time will in all probability win the game.

3. Win a Battle cards, which confers 1 Victory Point to a battle’s winning player. These battles usually lasts one round per turn and involve the occupants of only one tile, although Rubium Dragons have a bad breath ability that allows them to attack adjacent tiles. Each battle consists of the best units on both sides firing simultaneously and taking casualties. Then the second best fire simultaneously etc. So they are short affairs and quite bloody.

I have to say Nexus Ops is a true ‘beer and pretzels’ game. That is, it’s a game in which luck plays a large part, not a game that requires extensive analytical evaluations. In other words, the losers can always blame the dice or the cards for coming in fourth in a 4 player game. I know I do.

But from a grognard’s point of view this game just lacks something. Perhaps what’s off putting, at least for me, is it’s arbitrary, Euro style, victory level. It always seems that just when things get interesting the game ends because someone reached a certain VP total. And what makes it worse, these Victory Points are earned for all sorts of things, many involving random cards, which can’t be cancelled. So victory hasn’t a whole lot to do with the actual tactical situation at the end of a game. In fact, an alliance of players could have turned back the leader and even pushed him to the edge of elimination, but as he accumulated VPs early on he could still be declared the victor by the play of one last 1 VP ‘secret mission’ card. It’s as if in a historically accurate simulation of World War II the Japanese player declared himself the winner in July 1945 due to his early conquests and his ‘secret mission’ of holding out longer than Germany. Really? That’s winning? 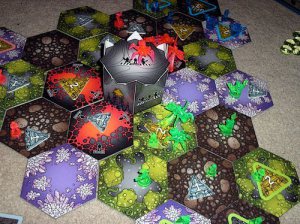 A typical Nexus Ops mid-game lay-out with an occupied monolith in the center.

Nexus Ops, therefore, is a light, Euro wargame, or a ‘waro,’ with good quality pieces (except for the Monolith, that is). And while I’m not really entranced with its victory conditions, the game does have some replay value due to its secret missions and the random placement of its tiles and mines. Plus, it doesn’t take a particularly long time to play and it’s just fun. So I’d play it again if asked.