This year a bunch of the usual suspects from Long Island took in Origins 2019 had a great time doing it. Origins is a gaming convention that’s been improving year after year and it showed. It’s certainly more organized than ever, it’s attendance has increased by a good 2,000+ attendees each year for the last 4 or 5 years and the number of vendors and events it held has steadily increased too. Of course, it’s not anywhere near as big as Gen Con, but then again it’s not anywhere near as crowded as Gen Con either.

For example, the large vendor hall was full for the first time in memory. with no empty booths or open spaces or role-playing combat arenas in its rear areas. as there were in prior years. Wednesday and Sunday were crowded and full of gaming events, which just never happened before, and it had a nice mix of games and events in large enough numbers to suit just about everyone. There even was wargaming, with Flying Pig, Academy, Decision, Tiny Battle, Victory Point Games, and the Armchair Dragoon present. Although it would have been nice if a few more big-name companies appeared. Maybe next year.

So altogether it must be labeled a success.

By the Origins Staff:

The 45th Annual Origins Awards Ceremony was held on Saturday, June 15. It was a great celebration of innovative people and games in the board games industry. In case you missed it, here are the winners! 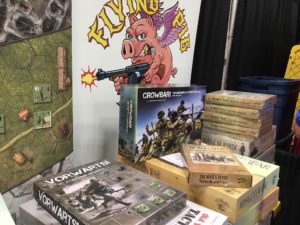 This pile of new games from Flying Pig and Tiny Battle was designed by Hermann Luttmann and developed by yours truly. They include “Crowbar: The Ranger at Pointe du Hoc” and its expansion “Vorwarts! plus “The Devil’s to Pay: The First Day at Gettysburg,” Tiny Battles’ first boxed game. “Crowbar” and “Vorwarts!” will be coming out in a few months. “The Devil’s to Pay” is available now. 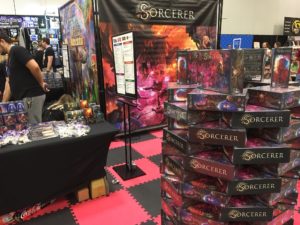 “Sorcerer” is from “White Wizard Games,” which had large presents. 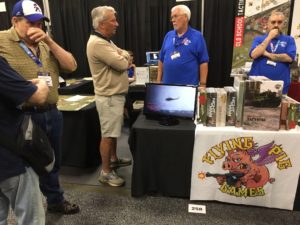 That’s Mark Walker of Flying Pig/Tiny Battle on the right and that Stephen Poitinger in the center. 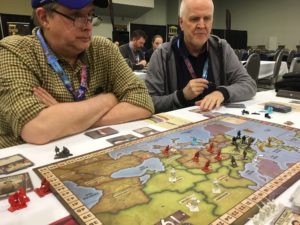 Hermann Luttmann on the left and Colby Duerk is on the right, playing “Quartermaster General 1914,” which is a wonderful game. 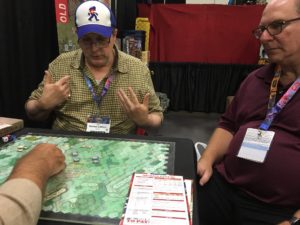 Hermann is demoing “The Devil’s to Pay: the First Day at Gettysburg” at the Tiny Battle booth with Dr. Harvey Mossman, of “The Boardgaming Life” and the “Grognard,” on the right. 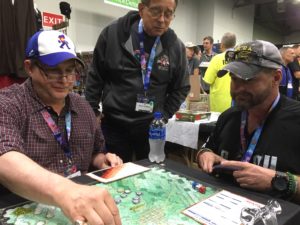 Another picture of Hermann demoing “The Devil’s to Pay” at Origins 2019. 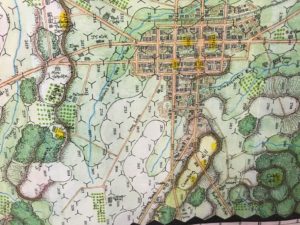 This is the Rick Barber map from “The Devil’s to Pay.” It depicts the area around Gettysburg with all of the important features involved on the first day of the battle. 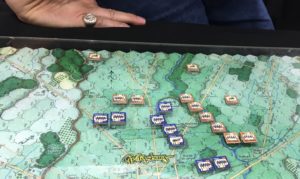 This is the position of the two sides deep into the tutorial scenario of “The Devil’s to Pay.” I always play the Union. 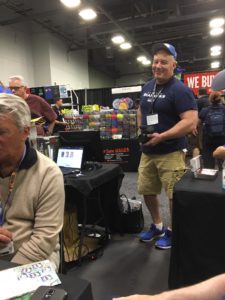 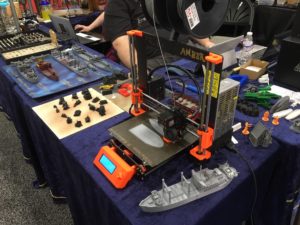 A prime example of some of the unique exhibits one finds at Origins. This is a 3-D printer producing ship models for sale. I believe the gray ship in the lower right was going for around $40 and was their best selling model. 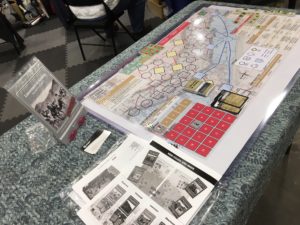 Decision Games was there, as was Academy, Tiny Battle, and Flying Pig. A number of other wargame companies were also present, such as GMT and Revolution, but only via third-party sellers. 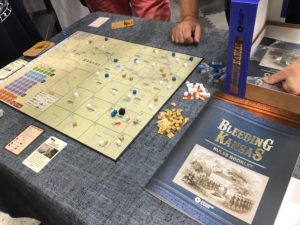 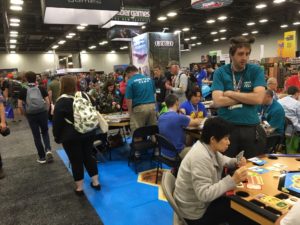 There were three or four large halls plus various rooms, and a very large hallway and all were busy for all 5 days of Origins: Wednesday through Sunday. What was surprising to someone who has gone to Origins for many years was that Wednesday and Sunday were full of gamers playing games. I don’t remember that ever happening before and it’s one of the reasons attendance broke all records.

Origins broke the 20,000 attendance mark for the first time in history this year. It was busy but not overcrowded. Once you got your ticket there really wasn’t any lines or waiting times as far as I could see.

Invicta – How did the US Navy win the Battle of Midway?

War and Pieces with Special Guests