Origins 2019 was an obvious success as far as organization and attendance were concerned. As for attendance, every day was busy and crowded but not overcrowded. Even Wednesday, a day traditionally marked by empty halls and few attendees, was as busy as I remembering any Friday in prior years. As for organizationally, there were obvious improvements in the computer system as far as checking in was concerned and the idea of having events on Sunday was brilliant and had the consequences of making the checking out of the hotels completely manageable. Up until a year or two ago checking out on Sunday morning was a nightmare, with people waiting 20 or 30 minutes for an elevator. After all, with nothing going on everyone had the same idea to leave early Sunday morning! I remember conventions where we were sure the elevator system must have been broken. When, in fact, it was just the impossibility of a 14 story hotel packed to capacity being emptied quickly when everyone with their baggage wanted to leave at the same time. So, kudos to the organizers of Origins 2019.

By the Origins Staff:

The following are some of the pictures I took while at Origins. Besides great open gaming, demos and vendors, there were quite a few publishers and video interviewers present 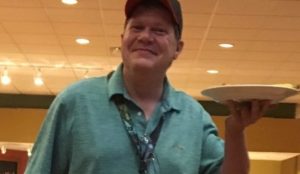 Jeff McAleer of “The Gaming Gang” and “The Daily Dope” having breakfast with us at Origins.

Each year a group of wargames from Long Island descend on Origins. This year there were 6 guys in our group. 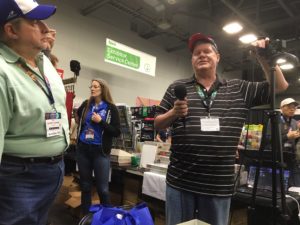 This is Jeff McAleer interviewing Hermann Luttmann on his new game “The Devil’s to Pay: the First Day at Gettysburg.” for “The Gaming Gang.” 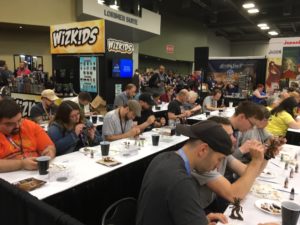 Origins has all types of game-related events going, including wargames, Card Driven Games, Euros, and miniatures. This is some attendees painting miniatures near the Wizkids‘ booth. 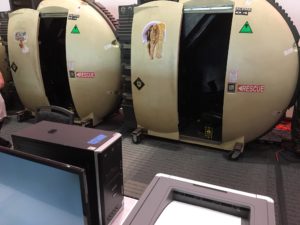 Origins also had electronic games. In this version, you enter a booth and fight with others in nearby booths. 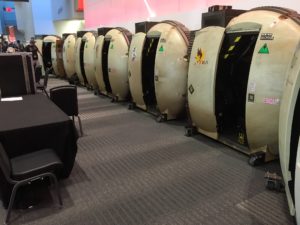 This is a shot of the entire virtual reality area. It was located in the large hallway connecting the gaming areas. 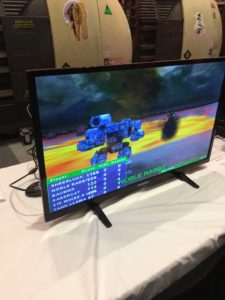 I believe this is what the screen in the booth shows you, but I’ve never used this system. 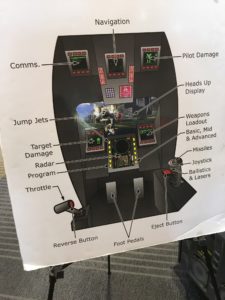 This is the sign outside the electronic warfare booth. One of the nice things about Origins is that while it’s big, it is not overcrowded. There really aren’t any long lines to see things, once you have your ticket to enter the convention. 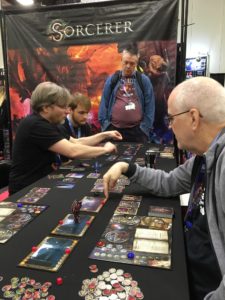 There are also continues or near continuous demos with professional help available. So you can test out new games before buying them. This is one of our group, Colby Duerk, testing out the game “Sorcerer” with Hermann Luttmann just off-screen. 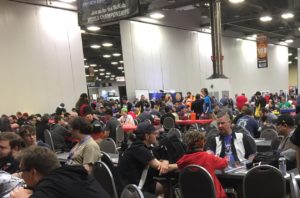 A portion of one of the halls. I believe this was the open gaming area. There were also another two or three halls and a rather long and wide hallway connecting them all, with another half dozen large rooms reserved for specific games, events, and vendors. This year there was plenty of room for open gaming and picking up a game to play was never a problem with anyone in our group. 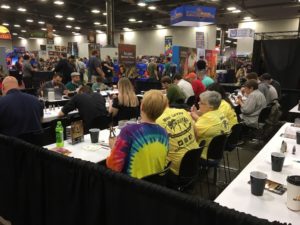 This is another shot of people painting miniatures at Origins. 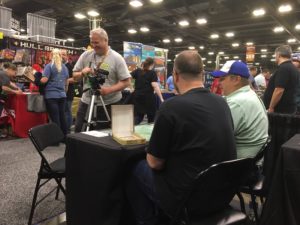 He is Alexander and Grant from “The Player’s Aid” interviewing Hermann Luttmann about his new game, “The Devil’s To Pay: the First Day at Gettysburg.” 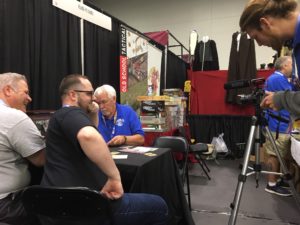 That’s Mark Walker of Tiny Battle Publishing and Flying Pig playing a game of “La Resistance” with Alexander and Grant from “The Players Aid.” This game will be published soon. It is an example of how upcoming games are introduced to the public via Origins. 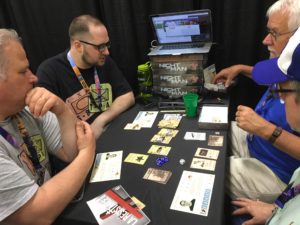 This is Alexander and Grant playing “La Resistance” with Mark Walker from another angle. 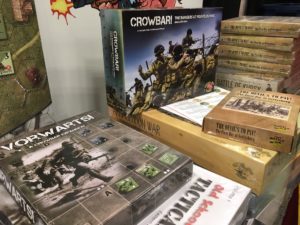 Here are three of Hermann’s newest games: The Devil’s to Pay, Crowbar and Vorwarts! The last two will be published shortly. (I was the developer on all three.)

In addition, Hermann and I will be publishing, later this year, “Escape from Hades” from Hollandspiele (I’ll be its designer and Hermann its developer), “Plum Island Horror” from GMT (hopefully, it will be on their P500 list before the end of the year) with Hermann as its designer and I its developer, “Like Hailstones on Rooftops” from Hollandspielle, by Hermann (I’ll be the developer) and “Miracle at Dunkerque: The British Withdrawal from France, May-June 1940 from Legion Wargames by Hermann. I think the last two will end up appearing in 2020, however.