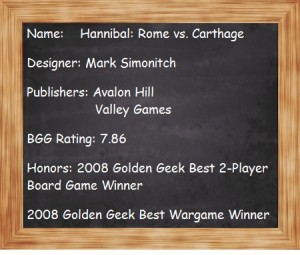 Simply put, Hannibal: Rome vs. Carthage is the best strategic Card-Driven Game (CDG) ever produced. To give you some idea of how good it is, old Avalon Hill copies once sold for $250 apiece on E-bay. However, while Hannibal is relatively uncomplicated by the usual wargaming standards it is more complex than what the average person thinks of, when they think of board games. Basically, it’s a two-player simulation of the Second Punic war, with one player controlling the forces of the Roman Republic and the other the forces of Carthage. If you are a history buff or a strategy board game buff, this is something you simply must have in your collection.
The Roman player has 3 or 4 field armies under various Consuls and Proconsuls, while the Carthaginian player controls 5 generals who may command an army each. Carthage, therefore, starts on the offensive and usually keeps pushing until Scipio Africanus appears two-thirds of the way through a game. Hannibal uses the old “We, the People” card system, with a strategy deck to randomize events (such as revolts, dismissals, reinforcements, epidemics, treachery, lost messages and storms) and a battle deck to generate a tactical Fog-of-War element. The movement system is point-to-point and covers the western Mediterranean, northern Africa, Italy, Sicily, Spain and southern France, while the victory conditions require controlling a majority of the politically important provinces.

Roman players typically begin games wary of large scale battles. They routinely move a sizeable army against Hannibal to keep him bottled up in  northern Italy and use their remaining forces to harass the Carthaginian player  until Scipio Africanus appears on the  6th game turn. Once Scipio arrives he’s used either obliquely, to spearhead the invasion  of provinces Hannibal can’t easily reach or more directly, to launch repeated attacks against a weakened  Hannibal himself. The Roman player’s main problem with this, or any other  strategy, is that most of his generals appear randomly, usually stay only one  turn and are a distinctly mixed lot. So, his power to appoint the finest of them  as Proconsuls and to use all of them to the best of their somewhat limited  abilities becomes critical.
With these problems in mind, it might help new players to review briefly each Roman general in a descending order of their usefulness.

Scipio Africanus should be used as a Roman “Patton”, only more aggressively. He enters play at a critical moment, usually in a critical location and with the tactical flexibility of a Proconsul. He moves easily. He has a superior battle rating and a special ability useful in sieges, which allows him to threaten enemy field armies and important walled cities alike. In addition, he initially appears with an escort of 5 extra Combat Units (CUs). Players consider his appearance a game changer. Unfortunately Scipio doesn’t arrive until turn 6 of a 9 turn game.
Marcus Claudius Marcellus known as “The Sword of the Republic,” should be used as Rome’s Proconsul for as long as the Senate allows. He is fairly easy to move, has a good battle rating and a special ability that also helps in sieges, although appointing Nero Proconsul does open up some interesting possibilities (see Gaius Nero).
Fabius Maximus should be used as a consul to hold key static defensive positions in Italy, as the “Shield of the Republic” can be depended upon to slow Hannibal by the use of his high tactical rating and special ability to withdraw from battle. Even so, in such situations, it’s not recommended that “the Delayer” be appointed Proconsul, as the play of the “Senate Dismisses Proconsul” card will force his replacement with the likes of Longus or Varro.
Gaius Nero is the last of the Roman Republic’s top generals. He can hold his own against anyone but Hannibal and with enough support he can even give the master a run for his sesterces. However, Nero’s special ability should not be overlooked, as he can move 6 spaces when using any of the 4 minor, or 2 major, campaign cards, in addition to the 3 Forced Marched cards normally available. This allows him much greater flexibility than usual. That is, with any of the 6 campaign cards or the 3 Ops Forced March card he can both send reinforcements to Africa or Spain by sea and return to guard Sicily or southern Italy all in one move or in a purely offensive mode, he can perform a naval invasion and travel 3 more spaces inland. Even when leading an army of 5 or less CUs (combat units) interesting possibilities for his use abound. For example, during a campaign, Nero can invade Spain by sea, move 3 spaces from the beachhead (all the while shedding 1 or 2 CU garrisons per space) and make contact with a full strength Consular army as it crosses the provincial border. With one card play, Rome has gone from having no forces in Spain to having 2 generals, a defensive stack of 10 or more CUs and at least 3 other spaces each covered with 1 or 2 CU speed bumps. Using variations of this strategy it’s entirely possible to flip a province’s loyalty in only 3 or even 2 card plays.
Gaius Flaminius is an average general and can be used against the lesser Carthaginian generals or even Hannibal himself given enough support.
And now we get to the guys who will cause you agita all game long. For some reason, they seem to appear at the worst possible moment in game after game.
Aemilius Paulus is not that bad if he can be kept in a purely static defensive position, due to his good Battle Rating, but poor Strategy Rating. But then again how many good static defensive positions are there?
Publius Cornelius Scipio is at his best in Hispania where his strategy rating is modified to 2, allowing easier activation (i.e. outside of Hispania, he can only be activated with a 3 Ops card). Otherwise, a decidedly average general.

Tiberius Sempronius Longus is so terrible defensively that any large army he leads is almost certainly in for a catastrophic loss. As any competent opponent will simply look at his hand, pick the tactic with the most cards, drill down until he’s sure (or almost sure) Rome is out of reserves and then goes for a double envelopment. So, good Roman players keep Longus on the offensive as often as possible, where he’s average. And keep in mind that when the “Senate dismisses Proconsul” card makes its inevitable appearance it is more than likely Longus will be selected by the Carthaginian player to be the general called back from retirement as he’s as bad as Varro on the defense, only harder to move.

C. Terentius Varro is fast on his feet but bad, bad, bad in battle. Did I mention how bad he is? Of course, when handled properly, even Varro has his uses. Especially when used in an anti-raider role, Varro is usually capable of handling such Carthaginian generals as Gisgo or Mago. That is, suppose Varro has 5 CUs stationed in Rome, he can move easily to the usually threatened sectors and will generate 8 cards in battle (5 CUs, 2 allies and a 1 battle rating). Against this, a typical Carthaginian raiding party contains 1 or 2 CUs, 1 ally and a 1 or 2 rated general for a total of, say, 5 battle cards or an average of less than 1 battle card for each tactical position. Now, given the abilities of your typical Carthaginian raider, when attacking, Varro can expect to hold the initiative for the first 3 to 6 rounds. In other words, he should have from 3 to 6 chances to find a hole in the defender’s thin position before he loses the initiative (and usually the battle). According to estimates on other board gaming sites, in these battles Varro ought to win 84 percent of the time against Gisgo and 77 percent of the time against Mago. And, of course, even if Varro loses, Rome can normally spare the 5 CUs and 2 PC (political control) markers risked. So, no, Varro and Longus are not totally useless.
However it’s important to remember that Longus and Varro are so awful in defensive battles that it may simply be worthwhile to accept their defeat as quickly as possible. Such tactics should not generate any casualties at all from attrition and an average of only 2 or 3 CU from retreat. When Varro commands the main Roman army, losing only 3 CUs and 1 PCs can be considered a moral victory in the face of Hannibal and the threat of total annihilation.

One of the keys to successful play in Hannibal: Rome vs Carthage is knowing the strengths and weaknesses of your commanders. I hope that the evaluations of each leader in this article will give Roman players a better sense of how to properly employ their leaders to maximize their effectiveness.
Related Articles:
Two Bad Generals … or, how to use Varro and Longus in the Hannibal: Rome vs. Carthage Board Game

“Four Player Variant for the Hannibal: Rome vs Carthage Board Game