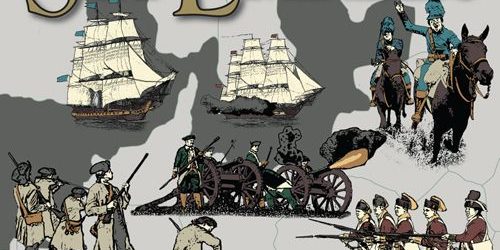 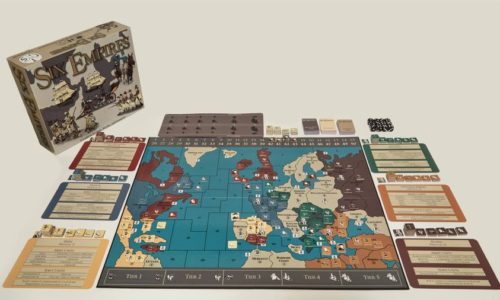 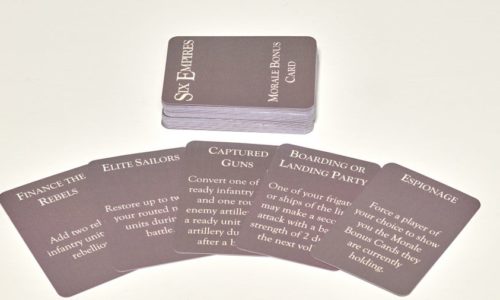 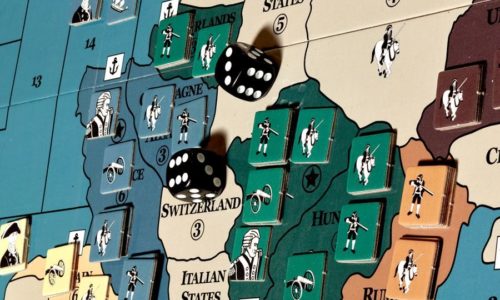 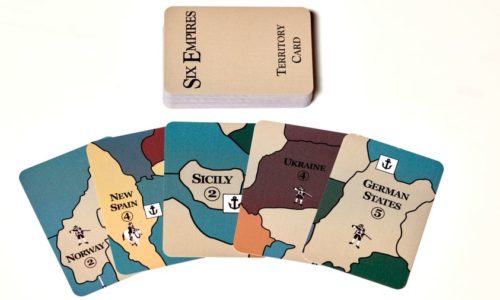 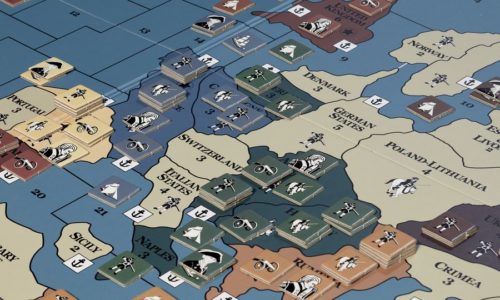 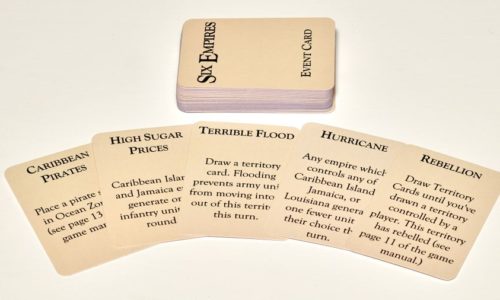 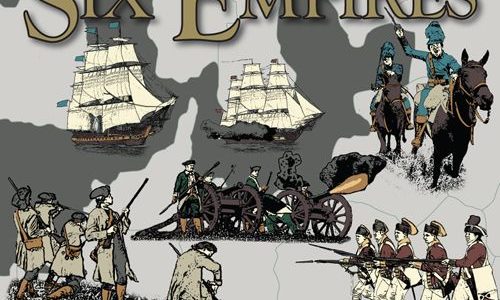 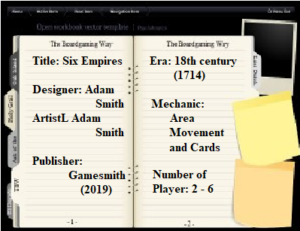 We played a 6-player game of “Six Empires” a couple of months ago and here are some of my initial observations and thoughts about the game. 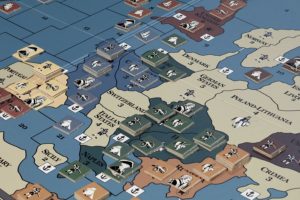 For those not involved in the game, the map is Europe, N. Africa, and the New World divided into 44 land areas and 27 ocean areas. Each of the land areas has a ‘prestige’ value that is awarded to the Empire that controls that area. To win the game an Empire must control land areas that total at least 30 prestige points which must include all its ‘home’ areas and at least one ‘home’ area of another active Empire.  This condition must exist at the START of an Empires turn.

The Home areas for each Empire are color-coded on the map. Russia has the fewest (three) while Great Britain has the most (six) with the rest being either four or five. Each Empire is given a set-up card that defines the units that start the game in each of their home areas. Some of the areas have either infantry or a cavalry symbol on them which represents a unit that is recruited at the start of an Empire’s player turn if they control that area. The Empires are close to evenly matched at the start with ‘home’ land areas worth 15 to 17 prestige and able to recruit two infantry and one cavalry.
The uncontrolled land areas are considered Independent nations. Empires must send in their armies to conquer them to add them (and their prestige) to their empire. Land units may move to an adjacent land area on their turn or embark on a ship in an adjacent ocean area to be transported by naval units which may move 3 ocean areas. 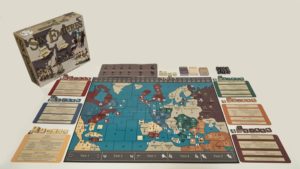 A quick comment on an Empire’s combat units and the combat system. Your basic land units are infantry (2), cavalry (3), and artillery (4). Naval units are Sloops (2), Frigates (3), and Ships of the Line (4). In combat, a d6 is rolled for each unit when it attacks which routs an enemy unit if the die is <= the rating. The defender gets the first fire. There is a twist here in that hits ‘rout’ an enemy unit which may subsequently be rallied back to action. Units that remain routed at the end of a battle are removed.

The only unit types that you recruit are infantry and cavalry. To create a higher level unit you must send newly recruited units to the training queue where they will improve one level at the end of the turn.  When a cavalry unit is promoted in this way you must decide if it will become an artillery unit (which can progress no further and should be deployed to the board when your player turn starts) or a sloop which can then be deployed or continue to progress to a frigate or Ship of the Line. Yes, it takes quite some time to build and deploy new naval units.

Once established, the turn order for the Empires never changes. An Empires turn is as follows.

There are several instances where a land area will ‘call out the militia’ when combat is imminent.
In all of these cases, a die is rolled and the prestige of the area is added to that number to determine the force that deploys. There are some additional modifiers for Independent Empires and non-player Empires to increase the force. The point of the exercise is that you don’t know the exact composition of the defending force, but you can expect higher prestige areas to deploy a stronger force. 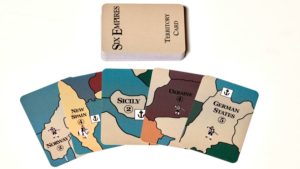 What is important to note here is that no militia is deployed to help defend a non-home area controlled by an Empire. When you conquer an Independent nation you must leave at least one land unit there to maintain control of that area and if attacked your garrison will be the only forces that defend it.  It is often easier to take an area from another Empire that has left a small garrison than it is to attack an Independent nation.

Great Britain, France, and Spain all start with significant possessions in the New World. These are considered ‘home’ areas and represent a significant portion of their starting prestige. 8 for both Great Britain and 11 for Spain.  Should any one of them begin to ‘Throw their Weight Around’ in that area, it could become a significant distraction for all of them. Should France lose both Louisiana and Quebec with no other area there, they would be ‘shut out’.
The only Independent Nations in this area are Iceland and Greenland in the north and Guyana in South America for a grand total of 4 prestige. Chump Change in the world of Great Powers. 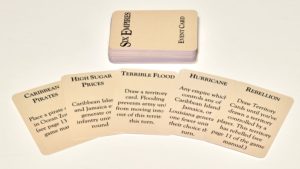 Naval power is important for those three Empires and they start with significant naval strength, but they must be careful to not suffer a naval disaster in battle.  Ships take a long time to build. Even so, since new units may be placed into any area that you control the loss of the fleet is not a ‘game-breaker’ for them.  However, the ability to swiftly load troops on your ships and threaten another Empires area is a huge advantage.

The Ottoman Empire, Austria-Hungary, and Russia have no overseas possessions. Russia, Austria-Hungary, and France will vie for the lucrative nations in Central Europe. To capture even a couple of them would add 7-9 prestige with only two non-home land areas to defend, then taking a 5 prestige home area from another Empire could set them up for victory.
The problem that Russia and Austria-Hungary face is the Ottoman Empire. Adjacent Independent Nations account for 3 prestige so the only path to victory for the Ottoman is through Austria-Hungary or Russia. Or both…which could turn out very, very badly for all three of them. My guess is that the Caucasus with prestige 2 and a cavalry symbol is vital to the Ottoman cause and must be held at all costs. From there the Ottoman will find progress difficult.
Maybe later I can ‘rough out’ strategies for each of the Empires. The important provinces are in Central Europe.  With only 2 or 3 of these land areas under control, an Empire need only seize a home area from an opponent to meet the victory conditions. Outside of there, the Independent nations have such low prestige numbers that many are needed to reach the 30-point target and defending many areas with 5 other Empires gunning for you can be a problem. 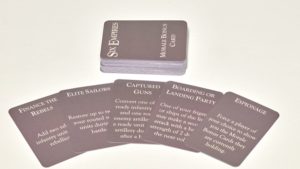 Russia (Roger) made an early ‘blitz’ which brought on a strong reaction from the rest of Europe. By grabbing Norway, Finland, Poland, and the Caucasus he had captured areas that increase his recruiting by two cavalry and two infantry each turn. This is almost twice that of any other Empire so multiple powers acted to ‘liberate’ some of those areas. Austria-Hungary (me) liberated Poland but was then driven out with such heavy losses that they had to be passive on turn 3 to rebuild. France (Barry) sent a mighty force to capture the Russian capital in St. Petersburg, but the Spanish (Joe) then took advantage of this to send an expedition to seize Quebec from the French.

Great Britain (Gary) sent a small expedition to harass Russia as well, but so far has not committed his armies to a land campaign other than occupying Greenland and Iceland. Norway is probably important to him with the added infantry recruit it provides and I expect him to take if from Russia if he has not already done so.
The Ottoman Empire (Jim) got off to a fast start by taking Caucasus and Crimea, but the weak garrison he left when he sailed his army to North Africa invited the Russian expansion project. His army has returned to the Black Sea area where both Russia and Austria-Hungary will keep a watchful eye on them.

Each Empire starts the game with two morale cards. You may discard a morale card to ‘rally’ a routed unit just prior to rolling the dice for your attack, but each of these cards has a bonus of some sort that is usually a better use of the card. Each time you win a battle you draw another card. At the end of your player turn, you may not hold more than 6 of them and must discard until down to 6.

Any time you lose a territory to another Empire you forfeit a morale card of your choice. Because of this, there is a strong incentive to use them as soon as practical.  Should you come under attack by multiple players you could lose several of these cards in addition to losing provinces. The events on the Morale cards can have a significant effect on a battle, so use them wisely or lose them. 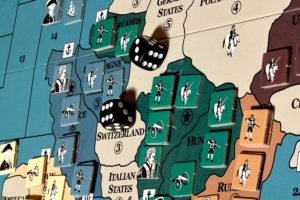 The commanders are quite useful at saving units when attacking smaller forces. Each round of combat allows him to return another routed unit to battle and prevent its elimination at the end of the battle. They will rarely be able to ‘save the day’ if attacked by an overwhelming force and if their entire army is eliminated, so are they!
Note also that a defending force fights to the death! Only the attacking force may retreat.

My 2¢ on suggestions for the game Six Empires:
1.    Use the sudden death victory conditions, but with a higher prestige score. I would suggest 40 – <Turn#> + 3 x <# of non-player empires>
There are multiple suggestions for a quicker game. My preference would be to use the one that reduces the prestige requirement to win by one each turn. The turn limit is more deterministic, but this gives Empires that move later in the turn an advantage.
2.    Only count Old World home spaces for victory. The New World still affects prestige scores.
I would be opposed to this.  Spain has only one home area in Europe, and France only two.  The overseas lands are an important part of these empires and they should be considered home areas for Winning.
3.    Draw 2 event cards per turn (because events are fun)
I am neutral on this. I would suggest that a second bad event to the same Empire in a turn be ignored.
4.    No morale card loss for losing a battle (it is tough enough on the defenders as is and morale cards are fun to play)
I would be opposed to this also. Attacking to force the opponent to use and/or discard Morale cards is a key element of the game.

{Editors Note: it’s also necessary to have lost the territory for the morale card lose to take effect].

I plan to renew the Struggle of Six Empires again.
Game Resources: