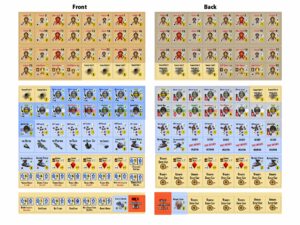 The Space Vermin from Beyond! design and development team is the same bunch of people who have worked on any number of other popular games. Only this time we switched seats. When Invaders from Dimension X! was created Hermann Luttmann of Dawn of the Zeds fame was its designer, I was its developer, Tim Allen was its artist plus Colby Duerk and Ed. Mostowicz were among its playtesters. This time I was the designer, Hermann and Colby were the co-developers and Ed. was the lead playtester.

Prior to creating the “Invaders” universe, more or less the same bunch of guys also published Stonewall’s Sword: The Battle of Cedar Mountain for Revolution Games, Duel of Eagles: Mars-La-Tour 1870 for White Dog Games and worked on Hammerin’ Sickles: Longstreet Attacks at Gettysburg and At Any Cost: Metz 1870 for GMT (AAC will be published in 2Q16 as of now). In addition we are working on Thunder in the Ozarks: the Battle of Pea Ridge for Revolution Games, which will be published this coming November. And, in a month or so, Tiny Battle will be publishing Dead Reckoning, a diceless and almost completely math free, zombie wargame. We also helped Kirk Uhlmann, its designer, work on The Lamps are Going Out – World War I for Compass Games.

For all those games (except Lamps) Hermann was the designer, I was the developer and Rick Barber or Tim Allen were our map makers. This time we switched around places to provide a different slant to the series.

So this is a veteran design team, which I hope and believe has produced a superior game.

For those interested in finding out how the 124th earned its name see here:

Space Vermin from Beyond BGG page

Space Vermin from Beyond Home page

How the 124th Earned its Name