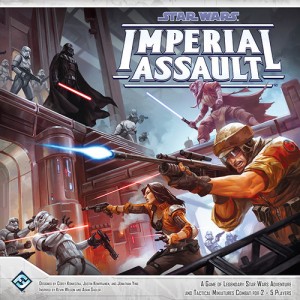 Last night a few of the usual suspects played a couple of Star Wars: Imperial Assault scenarios. Now, I really don’t know enough about the this Fantasy Flight game system to write a full review or even a decent After-Action-Report, but I can report that we all had fun and I’d play it again anytime.

Basically, we are talking about the board version of a SF video game: there are individual characters, with hidden agendas, special weapons/abilities  and missions. As play moves from one scenario to another your character gains experience points and credits, which can be used to obtain additional skills and upgraded weapons.

This is true even if you fail at one scenario, but, of course, your rewards for winning a scenario are different and greater than if you and your friends lose one. We had one player run the Imperial troops and four players run the Rebels. But even so, we lost the first scenario, which lead us into an entirely different second scenario than if we had won. 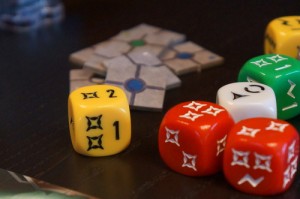 All in all, everyone seemed to have a good time and I thought it might be of some interest if I showed off a few pictures of what the game looks like.

1. The general set up. Note the locked doors: 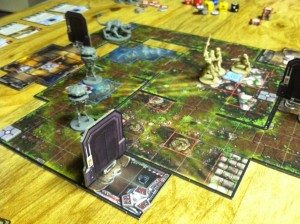 Basically the board is a tile game much like Space Hulk, with closed doors and various enemy troops and monsters that appear on the board as the game progresses.

2. A closer look at some Imperial reinforcements: 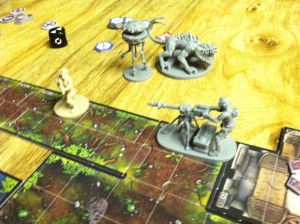 For example, in our first scenario an Imperial trooper (in unpainted gray) who looked for all the world like a guy with a 50 cal machine gun (actually he’s called an “e-web engineer”) suddenly appeared in the middle of our game.

3. A typical struggle at the doorway. 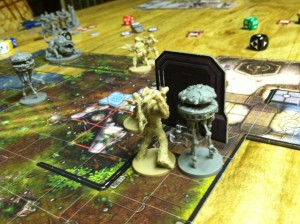 In our first scenario the Rebel mission was to get through three locked doors and examine what was behind them in 7 turns. In this case the door seemed to be guarded by a creature resembling a floating hamburger (actually a “Probe Droid”). The rebel forces are in a pail yellow, not having been painted. Unfortunately, the floating hamburgers slowed us up so much that we only got through two doors and so failed to achieve our mission objectives. This resulted in our getting a different second scenario, in which we seem to be doing just as badly, but in a different environment.

4. A character card and set-up: 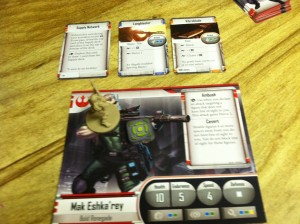 All the Rebel characters come with their own cards, each with a different set of characteristics. They are back printed, with the front side showing the character in good health and the reverse side showing his characteristics when severely wounded.
Each character has two impulses per turn and may attack in either one. When attacking they roll different colored dice, which generate various effects. The defender then rolls a defensive die, which is either white or black. Black defensive dice generate more powerful defensive blows than white ones. There are also red, blue, green and yellow offensive dice, with yellow dice being the most powerful. The small cards above the main character card list a characters weapons and special abilities. Their use usually generates “stress”, which can be lowered by resting for an impulse.

5. A look at the rest of the game’s footprint: 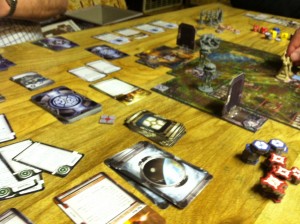 The game comes with various decks of cards that generate items, missions and special abilities. Most of which can be carried over from one mission to the next as long as you survive (even if you are wounded).

6. One of the lesser bad guys: 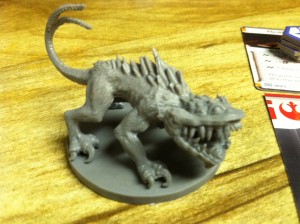 This one is a step up from your normal Imperial Stormtrooper cannon fodder. It’s called a “Nexu.” There are various other Imperial troops such as the “Trandoshan,” an Orc-like creature that didn’t appear in our scenarios.

7. A really bad, “bad guy.” This one is general Weiss in his own Imperial Walker. I assume his scowl has something to do with his being forced to ride on the outside of his own armored vehicle. 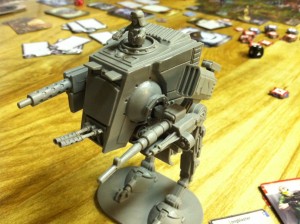 Another Imperial bad guy. This time in an armored vehicle, which is ten or twenty times as large as the standard Imperial Stormtroopers and so is unable to enter buildings or go through doorways.

————————————-
Now, we all had a great time even if I can’t really say I understood the finer points of the game, but there was one thing I found somewhat strange. My Rebel character had a stealth capability by which any enemy unit 4 or more squares away from him did not have a line-of-sight and so could not shoot. What I didn’t understand was why that same creature, who couldn’t shoot at my figure because he couldn’t see it was still able to charge and defeat my character in hand-to-hand combat. I thought his problem was that he couldn’t see my character? Anyway, it was a minor matter and fun was had by all.