We are deep into playtesting Hermann Luttmann’s next game in the Diceless results Series: “Steamroller – Tannenburg – 1914.” The first game in the series was “Dead Certain,” the second game was “Race to the Sea – 1914”, which was in Yaah! magazine issue 8.  And this will be the third entry. If all goes well we even have plans to expand it to SF games. Typically a DRS type game comes with one map, 88 counters and something around 36 cards, but it all depends on the subject and the publisher and the particular situation being simulated.

We will be demo-ing this game at Origins, probably at The Flying Pig booth and/or the Groghead wargaming area. Everyone is welcome to come by as see what’s going on. We are also planning to demo

Invaders from Dimension X!, Space Vermin from Beyond!, Race to the Sea, Longstreet Attacks and Steamroller. So we should be very busy. 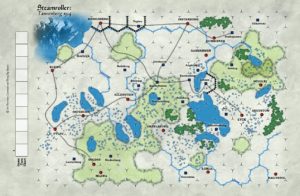 Here is the latest version of the Steamroller- Tannenburg 1914 map. The game is scheduled to be in Yaah! 10, which is the next issue to come out. So say in 3 months (?) as a guess. Hermann Luttmann is the designer, I’m the developer and Tim Allen is the artist. The Russians come in from the map’s right and from the map’s bottom. As the two Russian armies had difficulty coordinating their movement only one of them can be activated at a time. (Click to enlarge). 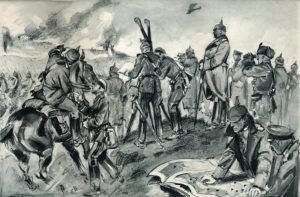 The game and the magazine issue of Yaah! #10 do not have a cover as yet. But I’d guess the rules length and the number of counters should be about the same as “Race to the Sea,” its sister game. We’ll know more in a month or so. I’ll keep everyone posted as things develop.