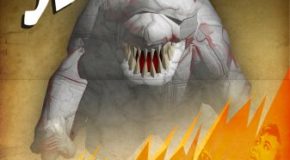 “Attack of the 50 Ton Colossi” Cover

Published on Jan 21, 2017   [“Dead Reckoning” was designed by Hermann Luttmann, developed by me and the art was done by Tim Allen. In other words, all the usual suspects. It uses a

Published on Jan 12, 2017 Invaders! designer Hermann Luttmann contributes his thoughts to this game as we set up turn one and talk about how people new to wargaming can approach this play.

By Jonathan V. Last In Star Wars, droids aren’t robots or comic relief—they’re chattel I always hated the Jawas. As a kid, the Jawas weren’t scary the way Stormtroopers or Darth Vader were. But there

A Review of “Invaders from Dimension X!” – Running the Gauntlet. “Heads Up!”

By Jonan Jello: “I finally had a chance to play Invaders from Dimension X! I chose the first scenario, Running the Gauntlet with the winning victory for the marines to get off the map on