Miniatures: The 149th Battle of Vogellsdorf – Phase One (A Photo Essay)

The Battle of Vogelsdorf (Episode 1 of 2) 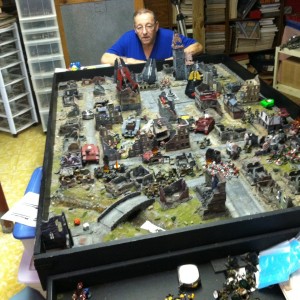 Last night we fought the 149th battle of Vogellsdorf. This time the village was defended by a mixed force of Space Marines and Imperial Troopers. Apparently, an Orc invasion had recently overrun the planetary capital. Although the royal family had managed to escape unharmed, the spacecraft holding the crown jewels had crashed in the capital’s suburbs.

The defender’s objective, therefore, is to hold off an unlimited number of Orcs and their goblin allies until an engineering vehicle can reach the wreckage and recover the jewels.

Owing to their being composed of that rare Earth metal “unobtainium” each jewel weighted over 300 pounds and unless the defenders can hold off the other-worldly hordes for at least 11 turns the bulk of the royal treasure will be lost forever.

(We used a simplified FUBAR skirmish system with three players controlling the Space Marines and the Imperial Troopers and one player controlling the Orcs and their goblin allies. The Imperial/Space Marine forces also had 4 Drop Pods worth of reinforcements to call on – though they were susceptible to Orc controlled AA fire – plus a few APCs and Earth Skimmers and one very important recovery vehicle with a powered crane. The Orcs had a few assault buggies, 3 helicopters and a giant, yellow robot. Where they got a “giant yellow robot” remains one of the enduring mysteries of this battle). 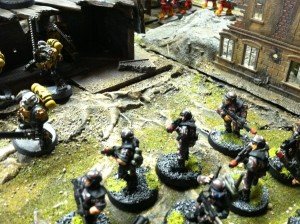 A platoon of Imperial Troopers are seen marching to the rescue. 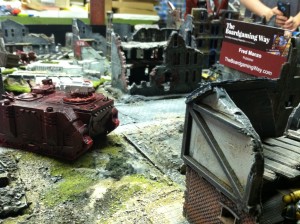 A royal APC has begun to form the Imperial Main Line of Resistance, which will run through the town in a north to south direction, just forward of the last billboard left intact in Vogellsdorf. 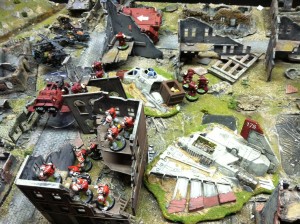 The first known photo of the wrecked shuttle craft. Note the Space Marines have already occupied the surrounding buildings in their ultimately futile attempt to hold off an unlimited number of Orcs and goblins. The crown jewels, in their emergency carrying case, can be clearly seen to have been thrown free of the wreck at the center of this photo. 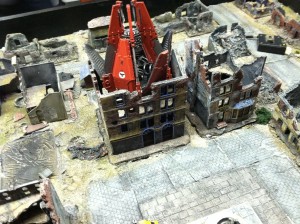 The first Space Marine Drop Pod crashed into a building when landing (after dodging Orc Anti-Aircraft fire). Eight of the 10 marines in the squad made it out alive. Their presumed landing point,  the town square, may be seen in this photo’s lower right hand corner. 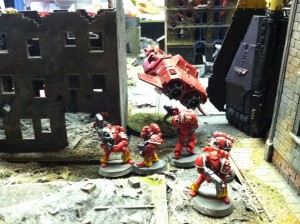 A platoon of Space Marines arrives via earth skimmer just behind the quickly forming Imperial front line. (They appear to be members of Duke Vogell’s Own Space Marines, also known as “The Red Devils”). To the right of this photo may be seen a successfully landed Space Marine Drop Pod. 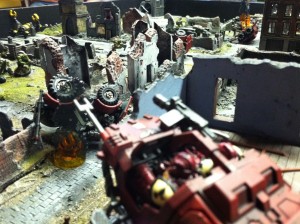 An earth skimmer holds the far left flank of the Imperial front line. Note the wrecked Orc assault vehicle immediately in front of its position. 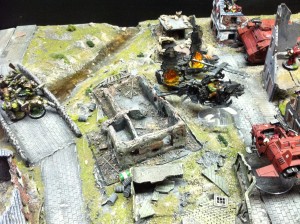 The first Orc assault, with wrecked Orc support helicopters burning on the near side of the river and an Orc horde swarming across the bridge. A royal earth skimmer may be seen leading the counter-attack in the lower right hand corner of this photo. 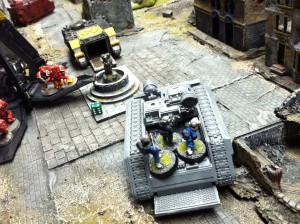 The royal engineering vehicle advances toward the downed spacecraft and the crown jewels. At this stage of the battle they have entered the town square, which is about half the distance to their objective. 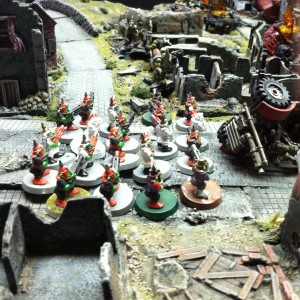 The Orc’s Goblin allies swarm the center of the Space Marine’s Main-Line-Of Resistance (MLR) under cover of a wrecked Orc assault vehicle. 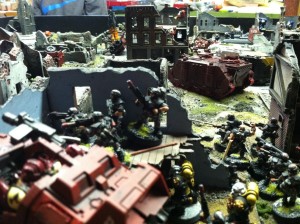 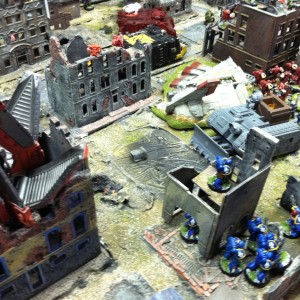 A photo of the wrecked shuttle craft with the engineering/recovery vehicle on scene. As seen from the far side of the town. 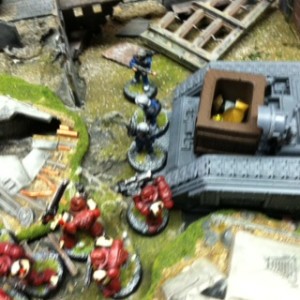 The royal engineers and their recovery vehicle beginning to load the crown jewels. Thus ending phase one of the battle.