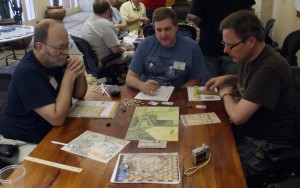 Hermann Luttmann in the middle flanked by Frank Chadwick on the left and Tim Allen on the right. The game being played is Gettysburg: The Wheatfield. Image credit: Victory Point Games. (BGG)

If I where to name two game designers who got me hooked on solo gaming then one of them would be Hermann Luttmann and since starting this blog doing an interview with him has been at the top of my list of goals.

The game that made Hermann stand out to me is Dawn of the Zeds, which for me ranks as the best solo game I’ve tried (and as the second bestselling game for the Publisher VPG) and I thought that the current Kickstarter for the third edition of that game was a good opportunity to do the interview.

Apart form Dawn of the Zeds Hermann has made several other games, such as In Magnificent Styleand A Spoiled Victory: Dunkirk 1940. Hermann stands out as one of those all-round nice guys, he’s very active in responding to rule questions about his games here on BGG and in the large number of comments, I’ve seen from him I don’t think there’s ever been a single negative word

This interview will therefore mainly focus on the history of the game, nonetheless we’ll start with the third edition…..