The Hunters: German U-Boats at War, 1939-43 – A Mini-Review From The Boardgaming Way

This afternoon I tried out Gregory M. Smith’s solitaire game of U-Boat conflict in the early Second World War. I had a good time but it deserves an in-depth review by a naval enthusiast, which I’ll work on getting as soon as possible. 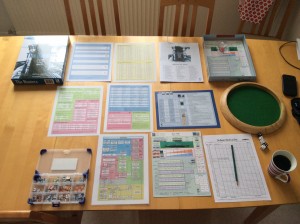 The hunters lay out from BGG

For now let me say that for the right type of player, who knows what he’s getting into, this game is a must. Now, it’s obviously a labor of love and very detailed. And as far as I can tell it covers just about everything you would want in a submarine game. But it might not be for everyone. First, it’s not just a solitaire game, it’s a mind game. The player has to supply all the imagination needed to get the most out of it, seeing that there are no maps, charts, or ship counters.

Basically, the sole player, acting as the U-boat’s skipper, makes the strategic decisions, such as what range to attack at, what type of torpedo to use, whether to follow up the attack or break it off, whether to attack on the surface or submerged or in daylight or at night and then the system does the rest by having him roll various dice on multiple charts. Not naval charts mind you, Combat Results charts and contact charts. 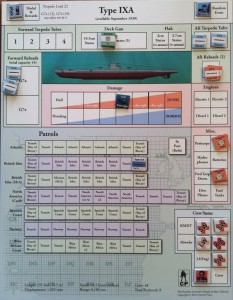 Now, most everything is there, including random events, dud torpedoes, deck guns, escorts, aircraft and mines, but it all takes place in your mind. If you have a vivid imagination this game will be a blast, but if you would rather see the sub close in on the fat, slow tranker in the fog at night you might consider this an exercise in dice rolling.

I played for about 2 hours and went on two patrols. The first one was off the Spanish coast, the second was in the British Isles. I managed to damaged a big tanker in the first patrol but I received some damage from its escort. On my second patrol I sank the carrier HMS Courageous with a spread of 5 torpedoes, but on returning to France was sunk by a passing aircraft.

It was with such experiences that I came to see why some players could be turned off by this game. While I was involved in the attack on the carrier, choosing the type of attack and the weapons involved, when the generic aircraft attacked me all that was involved was the rolling of some dice and the looking up of the results. As far as I could see, I had no way of influencing the situation. It came, it saw, it conquered.

So be aware of what you are getting yourself into. If you liked B-17: Queen of the Skies you will simply love this game too.

By the way, there is a very detailed sequence of play on Boargamegeek that is a must for new players (Here). And there will shortly be a Pacific (American) version released through GMT titled “Silent Victory” (1,175 pre-orders as of today).