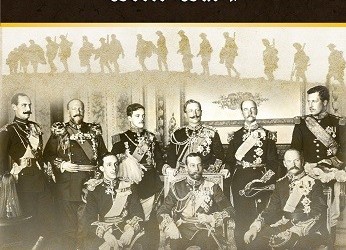 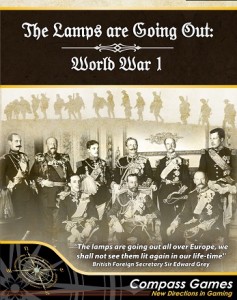 A proposed cover for Compass Games new “The Lamps Are Going Out: World War I” simulation

On Saturday morning at GMT East this past weekend, Hermann Luttmann let us get a crack at Lamps, designed by Kirk Uhlmann. Kirk has done some wonderful work in boiling down the gestalt of The Great War into a playable one-evening game with reasonable verisimilitude. Anyone who has heard me hold forth at length on my own game Cataclysm will know that I advocate for strategic games that do not bog down in operational detail. In my opinion, Kirk has succeeded in properly applying scope and scale in his design.

The map for Lamps is divided into areas, appropriate for the scale (less than half a dozen for France, for instance). This isn’t a game of maneuver, but of deciding how much force to allocate on each front. Still, some shifts in the front lines are possible. Units are armies, so you’ll rarely see more than five to ten on a side on each front. The game accommodates up to four players by splitting each side into Western/Eastern Allies and Germany/Everybody Else.

You start your turn by flipping an event card, which will give you a little narrative juice and some kind of bonus, penalty, or other type of event. You are then allowed to move just two (!) armies (this is called strategic movement, but it’s the only non-combat-related movement in the game, so…) This captures the forward thinking you must apply since you cannot shift huge numbers of troops from front to front, or even along a front to try to take advantage of opportunities. 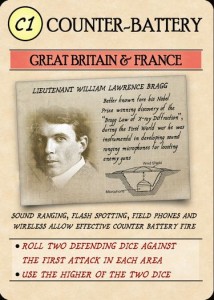 “The Lamps are Going Out: World War I” tech card.

The bulk of the turn occurs in the combat phase. Each fresh army can attack. One or more attacks from a given area against the same adjacent area is a single battle. Attacks are simple, each side rolls a die and high roll wins, attacker (!) winning ties. Of course, it’s not that simple. There are loads of events and technology cards (more on those later) that modify the number of dice thrown and the result.

If that sounds like it’s attacker friendly, it’s really not. An attacking army always becomes spent. If the attacker wins, the defender must either make one of their fresh armies spent, or if all defenders are already spent, must retreat out of the area. So often the best possible result is merely an exchange of both sides making one unit spent! But of course, if you have more fresh units than they do, then possibilities open up. What’s more, if the attacker succeeds in a given attack, he gets “big push” +1 for the next attack in the same battle… and you are always tempted to set up that big push only to have it come crashing down when you run out of fresh units before you can win enough attacks. I thought this captured the “just one more” feeling that drove generals to sustain offensives past the viability of success. Of course, technology, trenches, and other effects have their place in the combat system, but they are all integrated very simply into the mechanics and are never a burden on play.

Your turn ends with a production phase. Each country has a number of production points spread throughout its areas. You spend one point to flip a spent army to fresh, or build a new (but spent) army. You can also lend points to lesser powers (a key way for the senior partners to shore up their weaker allies). There are never enough of these points to go around, and if you make a big push but end up having to leave a bunch of your armies spent (I’m looking at you, Russia…) you become very vulnerable.

You can also spend up to two points on technology, which allows a blind draw from a deck. There are a few avenues of technology, and you succeed if you draw the next eligible step in any of them. Again, the tech modifies what you can do (win ties as the defender, for instance) without being a burden on play. Yet it is essential to try to stay ahead of your opponent on these game-changing modifiers. 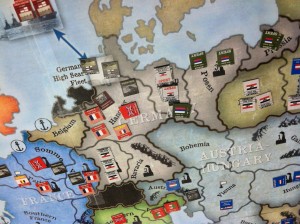 A recent Lamps playtest just prior to a Franco-British army taking Berlin and winning the war in 1916 (Strategy tip: Don’t roll five “1”s out of 6 attempts when defending Berlin.)

After all four players have gone through their sequence, you move on to the next turn. There are four turns in each year, with a handful of “automatic events” such as Turkish entry into the war, or trenches becoming available.

All in all, with a little experience I can see this game being played to completion in 2-3 hours. There are lots of little touches in the event cards and technologies that combine in clever ways to add narrative and a sense of how warfare was conducted in this period at this scale. I didn’t even get into the U-boat war, naval movement and combat, the Middle East and East Africa fronts, and so on… everything you would want in a one-sitting game on the entire Great War is here, so far as I can tell.

If that sounds like something you’d be into, run, don’t walk, to preorder Lamps from Compass when it becomes available.