The New York Times: A Game as Literary Tutorial

Dungeons & Dragons Has Influenced a Generation of Writers 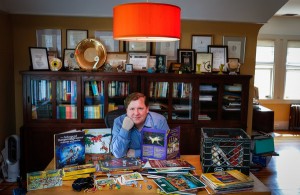 “The playwright David Lindsay-Abaire is one of many authors to have gleaned skills from Dungeons & Dragons” – The New York Times,

When he was an immigrant boy growing up in New Jersey, the writer Junot Díaz said he felt marginalized. But that feeling was dispelled somewhat in 1981 when he was in sixth grade. He and his buddies, adventuring pals with roots in distant realms — Egypt, Ireland, Cuba and the Dominican Republic — became “totally sucked in,” he said, by a “completely radical concept: role-playing,” in the form of Dungeons & Dragons.

Playing D&D and spinning tales of heroic quests, “we welfare kids could travel,” Mr. Díaz, 45, said in an email interview, “have adventures, succeed, be powerful, triumph, fail and be in ways that would have been impossible in the larger real world…..”