Thunder in the Ozarks: The Battle of Pea Ridge Playtest photos

“Thunder in the Ozarks: The Battle of Pea Ridge” is a sequel to Hermann Luttmann’s “Stonewall’s Sword: The Battle of Cedar Mountain.” Both games use his “Blind Sword” chit pull system to insure the proper amount of battlefield chaos and both are being published by Revolution Games, with “Tito” coming out some time this summer. Once again, Hermann is the designer, Rick Barber is doing the map, I’m the game’s developer and Roger Miller is the publisher. So far the project is moving along quite smoothly. But we still have to test the “Elkhorn Tavern” scenario. 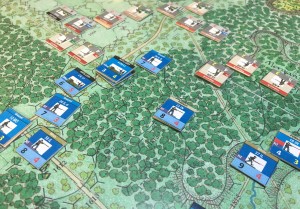 Here, we are about 2/3rds of the way through the “Leetown scenario.” The Confederate are trying to turn my right flank by advancing through Morgan’s Woods on the upper right of the photo. Leetown, where the Union supply train is located, can just be seen in the lower left. 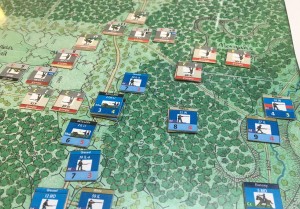 Jeff Davis (no, not that Jeff Davis) has just arrived with badly needed Union reinforcements. The Confederates have advanced with heavy casualties down the center of the board and through Morgan’s Woods to the Union’s right. But the effects of “double canister at 10 yards” can plainly be seen in the upper left of the photo. The Confederates with a light background are on their reduced side. (Although the components shown in these photos are for playtest purposes only.)

So far neither Confederate’s General McCullough nor his successor, General McIntosh, have been killed. In our last playtest McCullough was killed off quite early and his successor step up and did a simply magnificent job. Not that the Confederates needed such good fortune, as in a stunning turn of events, McCullough returned to the game! However, his recovery was so stunning, we changed the rules so that such an event, while still possible, will be somewhat rarer in the published version. (In these cases, just consider the reports of his death greatly exaggerated).