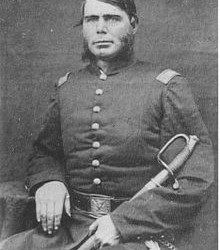 Lawyers on the Battlefields of the Civil War

Common Destinies, Common Pasts
On June 29, 1863, William Colvill was in a foul mood, which was only partly due to the hot, humid weather typical of Middle Atlantic summers.

Colvill, a 6’5” husky man and the colonel commanding the 1st Minnesota Infantry regiment, had risen swiftly through the ranks. Yet he had just been arrested by one of Union General Winfield Scott Hancock’s staff officers. Hancock was in a tearing hurry to move his Second Corps of the Union Army of the Potomac north from Frederick, Maryland, to Gettysburg, Pennsylvania, where cavalry scouts had just located the main body of General Robert E. Lee’s invading troops, the Army of Northern Virginia. Colvill was holding him up. Hancock had forced his troops to march up to 34 miles that day alone, and Colvill’s crime was to have allowed some of his men to halt long enough at a river to take off their shoes to keep them dry before they waded across. As a penalty, Colvill had to march on foot at the rear of his regiment, eating its dust. In three days, though, the arrest would be forgotten. Colvill would be at the front of his men and lead them to fame….. 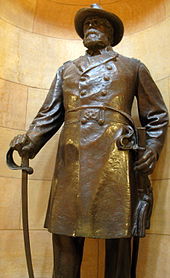 William Colvill statue in the Minnesota State Capitol. Colvill led the 1st Minnesota Volunteer Infantry in the Battle of Gettysburg. He was the third Minnesota Attorney General (from 1866 to 1868) and he also served in the Minnesota House of Representatives – Wiki