Although some people know Hermann Luttmann and I are working on a good 6+ games, today I’d like to discuss two of them in particular: “Hammerin’ Sickles: Longstreet Attacks at Gettysburg” and “At Any Cost: Metz 1870,” which covers the battles of Mars la Tour and Gravelotte–St. Privat in the Franco-Prussian war. Both games are being published by GMT, both are the first of a series (hopefully) and both use Hermann’s “Blind Swords” chit pull system.

“…And the ifs and thanks and the rest are all true enough
But we can only say, when we look at the board,
“There it happened. There is the way of the land.
There was fate, and there the blind swords were crossed….”

Now, the “Blind Swords” system differs from other such systems in a number of ways. First, unlike most other chit pull systems no unit is ever entirely out of the action or entirely certain of performing an action (just like in real life). Second, it has one of the most elegant Combat Results Table in the hobby and, third, it allows for a unit’s reactions in combat to effect nearby friendly units. So if a unit panics, for example, it may drag along other units in a headlong retreat.Basically, each army in a “Blind Swords” game is broken into four levels of command: its Commander-in-Chief, then either its corps commanders (as in “At Any Cost”) or its division commanders (as in “Hammerin’ Sickles”). These second-level commanders are then given ratings based on how likely it is that they would  be able to have units under their command conduct an operation within a specific length of time. 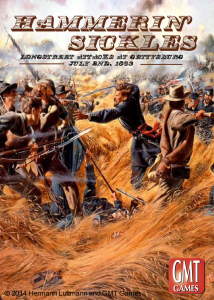 So, if general Hood, a second-level commander, is judged to be above average, he might be given an activation number of 4, meaning there is a 66 percent chance (using a D6) that a brigade of his will follow its orders within 20 minutes of it being given a command. (In HS there are 20 minute turns, in AAC it’s hour long turns). So once the Hood chit is drawn the Confederate player rolls a d6 dice and on a 1 through 4 one of his brigades is fully activated (unless its interrupted by the opposing player’s actions, more on that later) but on a roll of 5 or 6 the unit only manages to perform the most basic portion of a combat command. That is, it will fire at nearby opponents.Now, say Hood, as a corps commander, was successful in fully activating a brigade. This allows the brigade (a third level unit) to issue one of four orders: attack, defend, maneuver or rally/regroup to all of its sub-ordinate regiments. Each different order, of course, permits released units to conduct some actions, such as marching a certain distance, engaging or Close Assaulting the enemy, while forbidding them from performing certain other actions. So attacking units may not rally their stragglers nor may maneuvering units engage the enemy etc.However, there are more chits in this system then simple activation chits and some of these allow for all sorts of things to occur at all sorts of times. For example, the opposing player might take this opportunity to play his “fatigue” chit in order to slow those just released regiments or his “command confusion” chit possibly to change their orders. Of course, this being the “Blind Swords” system, players are usually not certain their opponent will be able to make use of these chits at any particular moment.On the other hand, some of a player’s own chits might allow him to re-activate a unit a second or even a third time in a turn. Options such a moving again (“Reserve Brigade Movement”), firing again (the “Firefight” chit) or activating fully a second time (the “Commander-in-Chief” chit) are entirely possible. It’s, therefore, important to realize that in this system units are never out of options simply because they have once done something in a turn.Consequently, the “Blind Swords” system not only provides players with a flexible chain of command capable of producing a series of coordinated actions, but it also gives opposing players the opportunity to interfere with those actions as they occur.If commercially successful, “Hammerin’ Sickles,” will be the first in a series that may include a companion game on Culp’s Hill and possibly games on the Wilderness, Vicksburg and even the Atlanta campaign.As for “At Any Cost: Metz 1870,” we hope to continue its series with a game on the battle of Koniggratz.

The “Blind Swords” system has been or will definitely be in the following games:

– All Are Brothers: Solferino 1859 by Bryan Armor to be published by Legion Wargames 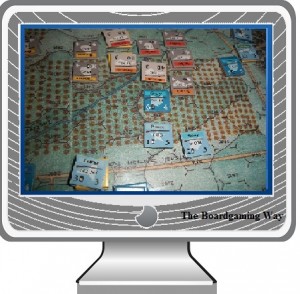 (Stonewall’s Sword with final map and counters being run through their final playtest before publication.)