Victory Point Games Having a “Going Out of Print” Sale. 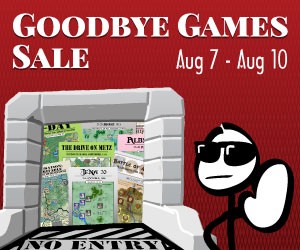 More Games Are Going Out of Print!

By the Staff of VPG:

We have thanked privately, and now wish to thank publicly, the designers and developers of these games and truly wish them the best. We loved developing almost every game we’ve published and each has its special place in our hearts and a page in our ongoing story.

Effective 10 August, 2015, we will cease to manufacture the following games. As their remaindered stock sells out, we will take down their product pages from our website and cease selling these games. Will another publisher pick up these games? Will they reemerge as new editions in the future? Only time will tell!

We will also be having a sale on all the titles listed below starting 7 August, with 30% off each title.

* May be re-released at a later date as part of a two-game set in the Napoleonic 20 series.