Mike Vogell and I have been working on a skirmish level miniatures game involving American troops guarding a Middle – Eastern village for some time now. So far we’ve got the village itself fairly well worked out, and we’ve put in some American positions, especially around the two main gates. There are even a few civilians walking around, but nothing much is happening. Once we finalize the game rules we may publish them here. but for now we’ve got these photos. 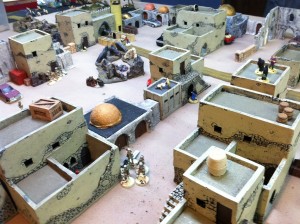 Wadi Vogell as seen from its North-East corner. you can just see a U.S. patrol in the lower center of this picture. 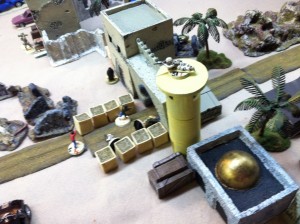 The south gate as seen from inside the village. Note that there is a scout/sniper stationed on the top of the tower. 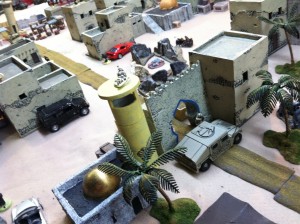 The same southern gate as seen from outside the village. A Humvee being used as a barrier can be clearly seen. 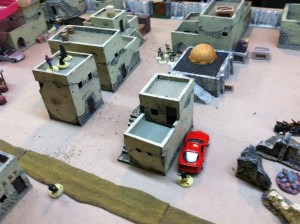 The inside of the village as viewed from above its western wall. 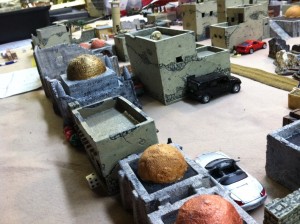 The western wall of the village as see from its southwestern corner. 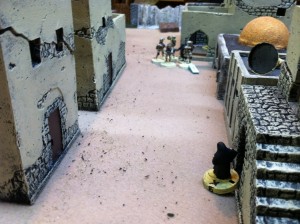 An inner street of the village, with a U.S. patrol at its far end. One of the few villagers now present can be seen in this picture’s lower right-hand corner. 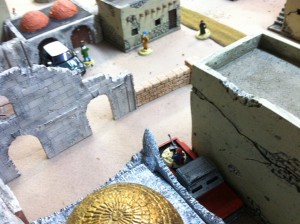 However, a truck mounted enemy trooper has recently been spotted in the village. 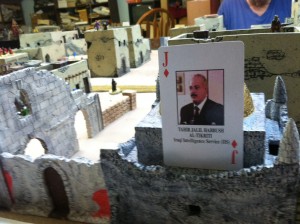 And the last time we swept through the village Intel did find indications that a high ranking enemy official was possibly hiding somewhere in the town. 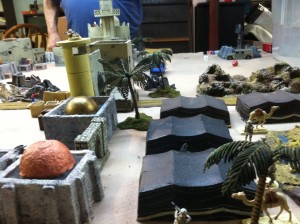 But by this time he may have re-located to the oasis just outside of town. Who knows? 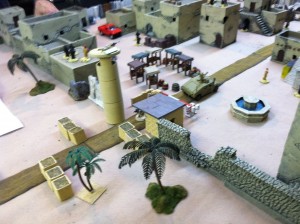 The north gate as seen from outside the village. Note the local market and fountain just inside the gate and the scout/sniper station on the tower’s roof. 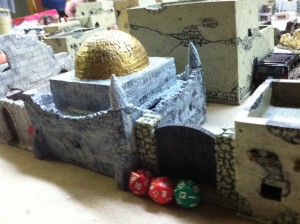 The villages western gate, which is apparently being temporarily blocked by a few misplaced dice.

Once we get the rules pinned down and populate the village with civilians and insurgents we can move on to setting up a scenario. Perhaps something involving a rescue mission. We’ve run something like this before, but we’ve never been completely satisfied with the rules or situation’s play balance.  Hopefully, we may be able to have this table go live in a few months.