Washington Post: How Nicky and Willy could have prevented WWI 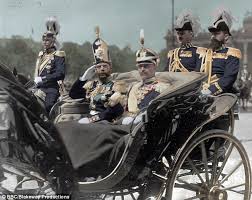 Graham Allison is director of the Belfer Center for Science and International Affairs at Harvard’s Kennedy School.

One hundred years ago this week, Tsar Nicholas II of Russia and Kaiser Wilhelm of Germany exchanged a series of telegrams to try to stop the rush to a war that neither of them wanted. They signed their notes “Nicky” and “Willy.”

Cousins who vacationed together, hunted together and enjoyed dressing up in the uniforms of each other’s military officers when sailing on their yachts, these two great-great-grandsons of Paul I of Russia wrote to each other in English, affirming their mutual interests and outlining an agreement that would have resolved the crisis on terms acceptable to both rulers.

Yet only three days after the tsar and kaiser’s initial exchange, Germany declared war on Russia, and World War I was underway…….