“In April 2018, a very large and interesting machine rolled out of a military museum in Verkhnyaya Pyshma, a town in Russia’s Sverdlovsk region. It was a T-35 — one of the most bizarre tanks of the interwar period and known in particular for its five turrets, huge size and short performance on the battlefield….” 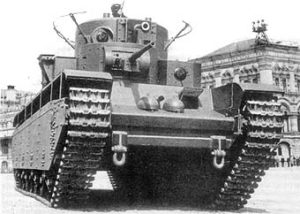 [I’ve heard all sorts of wacky tales about the T-35. Like how the only one that ever “saw action” actually broke down on the way to the front. One of its many problems wasn’t so much its horrible reliability but that its crews were so ill-trained or un-trained that they didn’t know how the tank was supposed to operate, so they just winged it. But, basically, its fatal flaw was that with a crew of 10 and light armor, one enemy shot knocked out 5 turrets and ten crewmembers. If those forces had been spread over two or three tanks the survival rate of your forces is instantly doubled or tripled.

As for the title of “The Most Bizarre Tank” ever created, my nominee is “the armored tricycle,” otherwise known as the “Czar’s Tank” from World War I. – Fred] 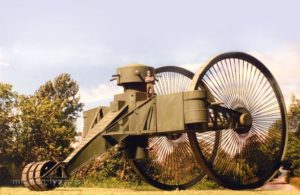 The Czar’s Tank from World War I. I believe there were only two ever made and one ended up stuck in a swamp for a few years after the war. By and large, they were anti-trench tank prototypes. It’s what you might imagine what a tank should look like if you had never seen a tank or even a World War II movie.