Washington Post: In the world of war games, Volko Ruhnke has become a hero 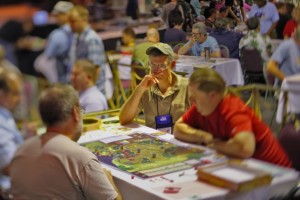 At the last stop on a wooded cul-de-sac 15 miles outside of Washington, four middle-age men huddle around a table to decide the fate of Afghanistan. A map is spread before them. Colored wooden cubes and discs denote military installations, troops and insurgents. A subtle movement — pieces slid from Nuristan province to Kabul — is met with tensed shoulders and exhaled expletives. In the north, the Warlords prep an opium harvest while threatening a terrorist attack. Elsewhere, everywhere, the Taliban is filthy with car bombs, roadside IEDs and suicide bombers.

The fifth man in the room, a CIA national security analyst named Volko Ruhnke, called us here. The palpable discomfort among us brings him joy. It means he has done his job.

When not ensconced at HQ in Langley, Ruhnke, 51, designs commercial wargames. He has invited us to his home in Vienna to playtest his most recent, A Distant Plain. Along with Cuba Libre, they’ll be his fourth and fifth published board games, and the latest in his series simulating insurgencies throughout history: Colombia, Afghanistan and Cuba, with Vietnam, Ireland and the Philippines to follow……