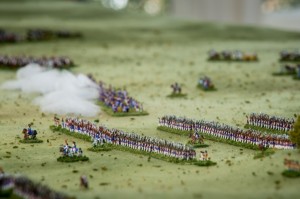 Flowers are in full spring bloom outside Bruce Weigle’s Alexandria home, but inside it’s the dead of winter: January 1871 to be exact.

Occupying a table top in the center of Weigle’s “gaming” room is a 6-by-7 foot swatch of 19th-century France: a Styrofoam-and-cloth scale model of the village of St. Quentin and environs that he built himself.. ….