By the Staff of the BBC

Prince Charles has unveiled a memorial to the British soldiers who fought at the Battle of Waterloo. 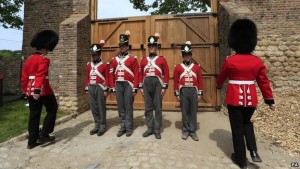 Thousands of enthusiasts have gathered to re-enact the Battle of Waterloo. – BBC

The prince and the Duchess of Cornwall visited the Belgian battlefield, before unveiling the memorial at Hougoumont farm, a key site in the fighting.

Events are marking the 200th anniversary of the battle, which cost thousands of British and allied lives in the defeat of Napoleon’s forces.

More than 5,000 enthusiasts are due to perform a re-enactment of the battle.

The BBC’s Nick Higham said many have been camped next to the farm at Hougoumont, which played a crucial role in the victory of the Duke of Wellington’s allied army over Napoleon’s French forces in 1815.

The farm saw some of the fiercest fighting of the battle….